Crude oil prices rose during most of the week until Friday when both WTI and Brent oil prices slipped.  Further, the gap between Brent and WTI also expanded. The recent OPEC monthly report revealed a slight decline in the oil production of Iran but the overall OPEC oil production didn’t change much.

Here is a short analysis for the price changes in oil (Brent and WTI) between August 6th and August 10th and a summary of the latest EIA report on petroleum and oil stockpiles:

Europe Brent oil also increased during the week by 3.68% and the average price by 4.94% compared with previous week’s average.

The difference between Brent and WTI spot expanded again during the week as it ranged between $18 and $20; its average premium reached $19.2; it finished the week at $20.70 – its highest level since the beginning of April 2012.

In the following charts (for the week ending on August 10th) are the daily changes in WTI spot oil, NYMEX Future (short term delivery) and Brent oil: 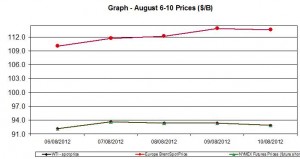 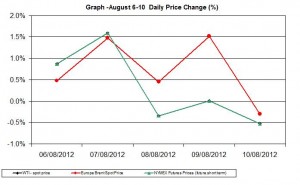 According to the recent EIA report on the American Petroleum and oil market, for the week ending on August 3rd, U.S. Petroleum stockpiles fell by 1 million bl and reached 1,800.3 million barrels.