Here is a short analysis for the rate shifts in oil prices (Brent and WTI) between February 18th and February 22nd and a summary of the latest EIA review on petroleum and oil stockpiles:

Europe Brent oil also declined during the week by 3.78%, and the average price fell by 2.25% compared with last week’s average.

In the following charts (for the week ending on February 15th) are the daily shifts in NYMEX WTI future (short term delivery) and Brent oil: 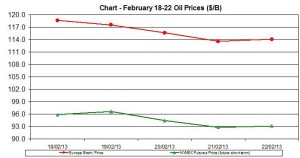 In the second chart are the daily percent changes (i.e. changes around the trend) of oil prices (WTI and Brent): 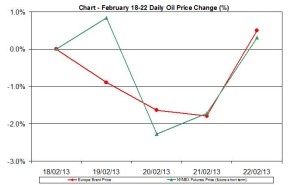 During recent years the lagged linear correlation between WTI oil price and current oil stockpiles reached -0.20. This mid-weak correlation suggests, assuming all things being equal, the rates of oil may rally next week.