Crude oil price changed direction and slightly increased during the previous week. The U.S stockpiles slightly fell according to the latest EIA report. The difference between Brent and WTI has shrunk again to a range between $18 and $20 during last week. WTI oil rose by 1.4% during the week; Brent oil, 0.41%. As a result, the gap between Brent and WTI reached $18.92/b on Friday.

Here is a short analysis for the rate changes in oil prices (Brent and WTI) between March 4th and March 8th and a summary of the latest EIA review on petroleum and oil stockpiles:

Europe Brent oil also slightly increased during the week by 0.41%, but the average price decreased by 1.08% compared with last week’s average.

In the following charts (for the week ending on March 8th) are the daily changes in NYMEX WTI future (short term delivery) and Brent oil:

The first chart presents the changes of WTI and Brent oil during last week: WTI oil and Brent oil slightly increased during the week. 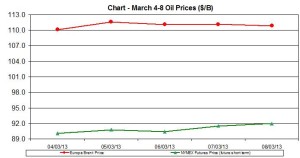 In the second chart are the daily percent shifts (i.e. changes around the trend) of oil prices (WTI and Brent): 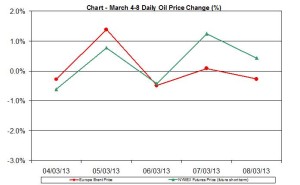 During recent years the lagged linear correlation between WTI oil price and current oil stockpiles reached -0.2. This mid-weak correlation implies, assuming all things being equal, the rates of oil may rise again next week.