Crude oil prices didn’t do much during last week despite the many news items that were published including the U.S. GDP report for Q4 2011.  There are still tensions between the speculation revolving the stability of Euro Area and thus its demand for oil in 2012 and the concerns revolving the recent boycott of Iranian oil by the West. These two forces work in the opposite directions.  During last week, WTI oil price rose by 1.12% and Brent oil by 0.99%; as a result, the difference between Brent and WTI reached $11.16/b on Friday.

Here is a short recap for the development of crude oil prices (Brent oil and WTI), and a summary of the recent EIA crude oil and petroleum stockpiles report for the week of January 23rd to January 27th:

NYMEX Futures Price (February delivery) also slightly rose by 1.25% during the week, and reached $99.56/b on Friday, January 27th

Europe Brent oil price also increased during the week by 0.99% but the average price declined by 0.31% compared with previous week’s average.

The difference of Brent over WTI spot prices didn’t’ change much during the week; its average premium was $10.86; it finished the week at $11.16.

In the following charts (for the week ending on January 27th) are the changes in WTI spot oil, NYMEX Future (Short term delivery) and Europe Brent prices: 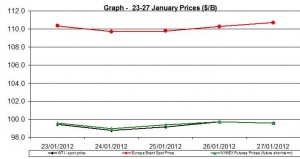 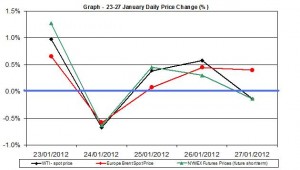 Crude oil prices started off the week increasing, then on Tuesday they declined and during the rest of the week they have moderately rose.