Crude oil prices changed direction and slightly declined during last week after they had risen during most of February.  There are still concerns regarding the tensions between Iran and the West but since there wasn’t any movement on this front, oil prices remained high. The positive news of the 3% growth of the U.S GDP during he last quarter of 2011 along with Bernanke’s testimony may have also contributed to oil price to remain high.  During last week, WTI oil price declined by 2.55% and Brent oil by 1.78%; as a result, the difference between Brent and WTI reached $17.69/b on Friday.

Here is a short recap for the changes in crude oil prices (Brent oil and WTI) between February 27th and March 2nd and a summary of the last EIA oil stockpiles update:

NYMEX Futures Price (April delivery) also decreased by 2.8% during the week, and reached $106.70/b on Friday, March 2nd.

Europe Brent oil price also fell during the week by 1.78%, while the average price increased by 0.3% compared with previous week’s average.

The difference of Brent over WTI spot prices slightly declined during the week; its average premium was $16.83; it finished the week at $17.69.

In the following charts (referring to the week ending on March 2nd) are the shifts in WTI spot oil, NYMEX Future (Short term delivery) and Europe Brent prices: 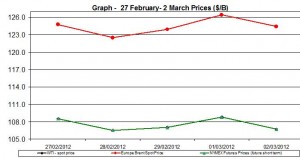 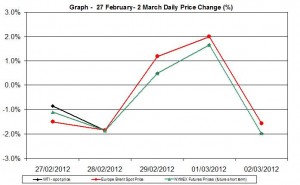