Crude oil prices didn’t move in the same direction during last week as Brent oil price rose, while the price of WTI oil declined. The ongoing concerns revolving the boycott of Iranian oil by the West may have been among the factors in pulling these two energy prices apart. During last week, WTI oil price fell by 1.73% while Brent oil rose by 3.22%; as a result, the difference between Brent and WTI sharply rose to $16.44/b on Friday.

Here is a short recap for the changes of crude oil prices (Brent oil and WTI), and a summary of the recent EIA oil stockpiles report for the week of January 30th to February 3rd:

NYMEX Futures Price (March delivery) also slightly declined by 1.73% during the week, and reached $97.84/b on Friday, February 3rd

Europe Brent oil price on the other hand rose during the week by 3.22%, and the average price increased by 1.33% compared with previous week’s average.

The difference of Brent over WTI spot prices sharply rose during the week; its average premium was $13.83; it finished the week at $16.44.

In the following charts (for the week ending on February 3rd) are the changes in WTI spot oil, NYMEX Future (Short term delivery) and Europe Brent prices: 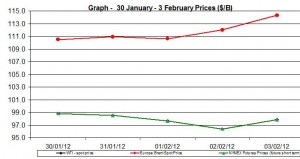 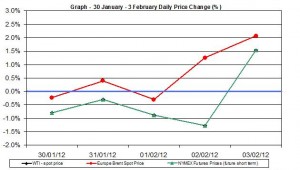