Crude oil prices started off the month on a positive note as it rose during the first week of December. The recent development in the Middle East including the sanctions on Iran helped keep oil prices high. Furthermore, the recent positive reports on the US economy including the growth in employment by 120k, may have also helped rally the financial markets including the crude oil market.

Here is a review of the price changes during last week (November 28th to December 2nd) of crude oil (Brent oil and WTI), and a summary of the recent EIA crude oil and petroleum stockpiles report:

NYMEX Futures Price (January delivery) also added 2.8% to its value during the week, and reached $100.96/b on Friday, December 2nd

Europe Brent oil price also inclined during the week by 0.91% and the average price rose by 3.19% compared with previous week’s average.

The difference of Brent over WTI spot prices continued to slip during the week; its average premium was $10.45; it finished the week at $9.39. I review the recent development in the premium of Brent oil over WTI oil in a recent post. 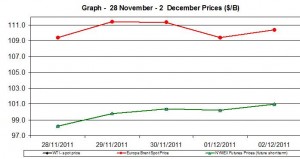 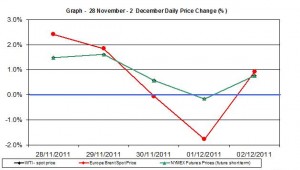 Crude oil prices started the week rising and as the week progressed the growth rate changed from positive to negative until Friday when both energy prices rose.