Crude oil prices started December with a downward trend after they had risen during the past couple of months. Next week there is an OPEC meeting that might stir up the oil market and affect the crude oil prices’ development.

Here is a review of the price development of crude oil (Brent oil and WTI), and a summary of the recent EIA crude oil and petroleum stockpiles report for the week of December 5th to December 9th:

WTI oil price (spot) moderately declined during last week by 1.56%; its weekly average price on the other hand slightly inclined by 0.20% as it reached $100.1 per barrel, compared with last week’s $99.90 per barrel. The average daily percent change of crude oil price (WTI) was -0.30%.

NYMEX Futures Price (January delivery) also shed 1.56% off its value during the week, and reached $99.41/b on Friday, December 9th

Europe Brent oil price also declined during the week by 0.70% and the average price slipped by 1.18% compared with previous week’s average.

The difference of Brent over WTI spot prices continued to moderately decline during the week; its average premium was $8.95; it finished the week at $9.32. I review the recent changes in the level of the premium of Brent oil over WTI oil in a recent opinion post. 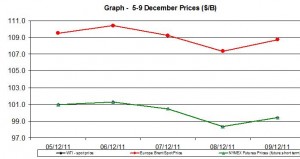 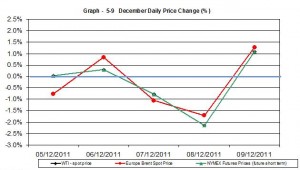 Crude oil prices sharply declined on Thursday by nearly 2%, while the sharpest gains  of the week were on Friday.