By the end of the week, Brent oil price added 5.49% to its value and WTI spot oil inclined by 1.95%; as a result, the spread between Brent oil and WTI oil sharply inclined to $28.70/b on Friday – the widest spread in October.

Here is a review of the changes during last week (October 10th to October 14th) of crude oil prices (Brent oil and WTI), and present a summary of the recent EIA petroleum report:

NYMEX Futures Price (November delivery) also inclined by 1.63% during the week, and reached $86.80/b on Friday, October 14th

Europe Brent oil price also sharply inclined by 5.49% during the week, and the average price rose by 7.43% compared with previous week’s average.

The premium of Brent over WTI spot prices sharply inclined during the week; its average price was $26.36; it finished the week at $28.70.

In the chart, Brent spot oil and WTI prices present an upward trend during most of the week. 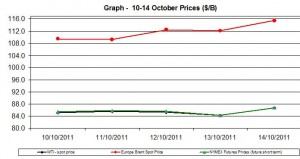 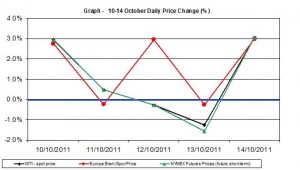 Brent and WTI spot oil prices sharply inclined on Monday, Wednesday (just Brent oil) and Friday; on the other hand they have moderately declined on Thursday.

The chart below presents the crude oil stockpiles levels compared to the WTI spot oil price during 2010 and 2011. 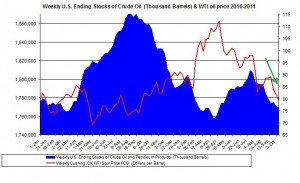