The crude oil market had a less volatile week during the first week of November as oppose to the last week of October, but the news from Europe regarding the Greek debt crisis brought some volatility to the commodities markets including crude oil market; the   ECB rate reduction also helped shack the financial markets, and the news of the U.S and Canada labor reports, which were published on Friday, may have also helped keep crude oil prices high.

Here is a review of the price changes during last week (October 31st to November 4th) of crude oil (Brent oil and WTI), and a summary of the recent EIA crude oil and petroleum stockpiles report:

NYMEX Futures Price (December delivery) also added 1.15% to its value during the week, and reached $94.26/b on Friday, November 4th

Europe Brent oil price also rose by 2.77% during the week, but the average price fell by 1.33% compared with previous week’s average.

The premium of Brent over WTI spot prices sharply declined during the week; its average premium was $17.06; it finished the week at $18.29.

In the chart, crude oil prices had a moderate upward trend throughout the week. 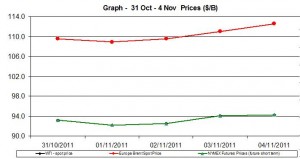 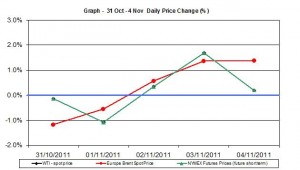 Crude oil prices started the week with sharp falls and as the week progressed the oil prices daily percent changes shifted from negative to positive changes. The highest gains were recorded on Thursday.