Crude oil prices continued with their upward trend especially WTI oil prices during last week; the premium of Brent oil over WTI oil price also continued to contract. The rapid changes in Europe including the recent changes in Italy and Greece helped stir up the financial markets and may have been among the leading factors to affect the changes in crude oil prices throughout the week. The IEA revised down its projections for the global oil demand, and OPEC’s oil production remained virtually unchanged in October.

Here is a review of the price changes during last week (November 7th to November 11th) of crude oil (Brent oil and WTI), and a summary of the recent EIA crude oil and petroleum stockpiles report:

NYMEX Futures Price (December delivery) also added 3.63% to its value during the week, and reached $98.99/b on Friday, November 11th

Europe Brent oil price on the other hand moderately declined during the week by 0.86%, but the average price inclined by 3.41% compared with previous week’s average.

The premium of Brent over WTI spot prices sharply declined during the week; its average premium was $16.85; it finished the week at $14.77 – the lowest level since June 28th, 2011.

In the chart, WTI spot oil price had a moderate upward trend throughout the week while Brent oil price didn’t present a clear trend and eventually declined. 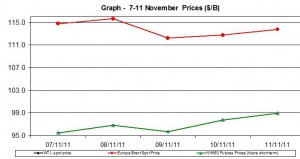 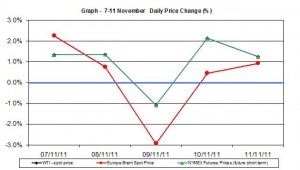