According to this week’s Energy Information Administration petroleum report crude oil stockpiles rose during last week by 3.8 million barrels; crude oil prices slightly fell. The report also refers to the heating oil bills for this season; the EIA report concluded the bills are still high compared with last year’s even though the average consumption of heating oil is at nine year low. The low consumption is probably due to the warmer than normal weather in the Northeast region for the season and the low natural gas prices.

Here is a weekly summary for the week ends on February 3rd of the U.S. oil and petroleum market:

The chart below shows the development of petroleum and oil stockpiles and WTI crude oil price during the last few years. It shows that despite the increase in the stockpiles in recent weeks, it is still very low compared with previous year’s stockpiles levels. During 2011-2012, the lagged linear correlation between WTI oil price and current oil stockpiles was -0.15. 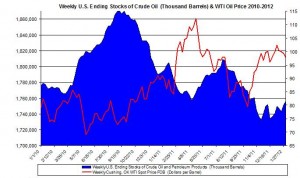 Petroleum production and imports (for the week of February 3rd)

Below is a detailed recap of the information listed above (for the week of February 3rd):

Propane stocks fell by 2,312 thousand barrels and reached 46,677 thousand barrels. The average residential propane price declined by less than one cent to $2.86 per gallon; the current price is only $0.03 higher than the rate during the same week in 2011.

The national average Diesel price also rose by one cent to $3.86/g, which is $0.34/g higher than last year’s average price at same time.

A detailed analysis of crude oil prices for the week ending on February 3rd is herein.