Crude oil prices closed the month of March with rises partly might be due to the expiry of the April futures. Current oil prices are moderately rising.

Despite the assistance of NATO and the Allies’ forces to the rebels with their fight against Qaddafi’s regime, Qaddafi’s troops continue their assault on Libyan cities where the rebels dwell. It’s still far from clear who will prevail in this war, e.g. according to CNN, just the oil city of al-Brega changed hands six times in the past six weeks.

There are still uprisings in Syria, Yemen and Bahrain (see here for the latest news about Syria).

Following the tsunami attack and the earthquakes that followed, Japan will need to increase its energy imports of coal, natural gas and oil to compensate for the energy drop it suffered with the loss of several of its nuclear power reactors. During February, prior to the tsunami, Japan’s crude oil imports rose by 3.4% (compared to January), mostly from the Middle East (89.5%); Saudi Arabia was Japan’s biggest oil supplier. In March and April there will probably be an even higher rise in Japan’s oil imports.

Major oil prices are currently rising in the European markets:

The recent rally of oil prices at the closing day of March might be related to the expiry of the April futures. I still think that oil prices are high; the tight oil market, mainly in Europe and partly because of the Libyan war and Japan’s energy shortage will probably continue to affect the oil market and drive its prices up, but if so it will be moderate rises.

Difference between Brent oil and WTI spread: yesterday the final day of March the premium of Brent over WTI didn’t change much and reached 10.53$/b; the average premium in March 2011 was 11.89$/b and ranged between 7$ and 15 $ as seen in the chart below. I speculate that the premium will remain around the range of 10-12$/b . 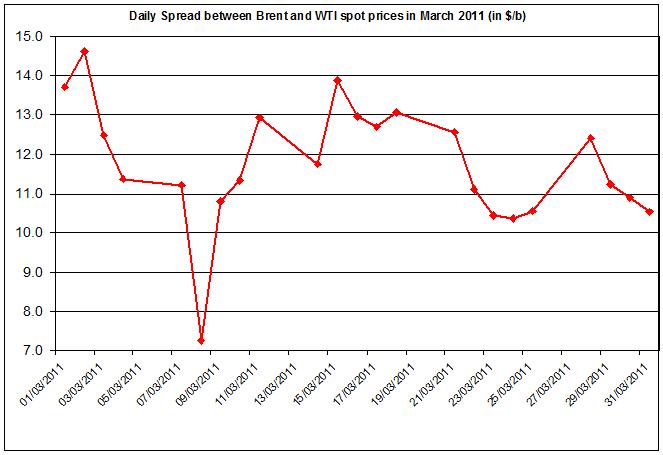