Here is a weekly review for the week ends on January 6th of the U.S. oil and petroleum market:

The chart below shows the development of petroleum and oil stockpiles and WTI crude oil price during 2010 -2012. During 2011-2012, the lagged linear correlation between WTI oil price and current oil stockpiles was -0.13. 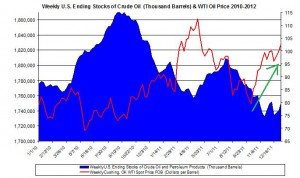 Petroleum production and imports (for the week of January 6th)

Below is a detailed recap of the information listed above (for the week of January 6th):

Propane stocks declined by 891 thousand barrels and reached 54,285 thousand barrels. The average residential propane price slightly rose again by less than one cent to $2.87 per gallon; the current price is $0.11 above the rate during the same week in 2011.

The average U.S. gasoline retail price sharply rose last week by eight cents per gallon compared with the previous week’s average; it reached $3.38 /g, which is $0.29 /g higher than the same week in 2011.

The national average Diesel price changed direction and after it had increased for six straight weeks it also rose last week by a nickel to $3.83/g, which is $0.50/g higher than last year’s average price at same time.

A detailed analysis of crude oil prices for the week ending on January 6th is herein.