In this week’s Energy Information Administration petroleum report there is a yearly recap on the crude oil market for 2011..

Here is a weekly review for the week ends on December 30th of the U.S. oil and petroleum market:

The chart below presents the development of petroleum and oil stockpiles and WTI crude oil price during 2010 and 2011. During 2011, the lagged linear correlation between WTI oil price and current oil stockpiles was -0.14. 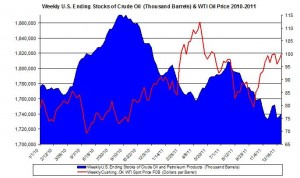 Petroleum production and imports (for the week of December 30th)

Below is a detailed recap of the information listed above (for the week of December 30th): 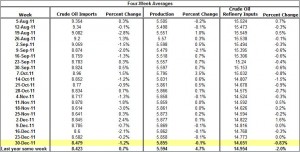 Propane stocks declined by 1,000 thousand barrels and reached 55.176 million barrels. The average residential propane price slightly rose again by less than one cent to $2.87 per gallon; the current price is $0.13 above the rate during the same week in 2010.

The average U.S. gasoline retail price changed direction and rose last week by four cents per gallon compared with the previous week’s average; it reached $3.30 /g, which is $0.23 /g higher than the same week in 2010.

On the other hand, the national average Diesel price declined for the sixth straight week, last week by a penny to $3.78/g, which is $0.45/g higher than last year’s average price at same time.

A detailed analysis of crude oil prices for the week ending on December 30th is herein.