The declines of oil prices from the beginning of the week has subsided as WTI and Brent oil prices bounced back yesterday with moderate rises. Current oil prices continue to rise.

Let’s examine the main news for today, April 14th that might affect the crude oil markets, including the G7 meeting today.

In preparation for the G20 meeting tomorrow, G7 is convening today.  The G7 comprise of the United States, Britain, France, Germany, Italy, Canada and Japan. These countries plan to talk about the economic ramifications of the tsunami disaster in Japan, the high oil prices and the growing debt concerns in several countries such as Britain.

Despite WTI oil price fluctuated very precipitately during April, it has only declined by 0.4% as of yesterday, April 13th; Brent oil price rose by 3.5% during April.

Notice how Australian dollar has a strong correlation with Brent and WTI oil prices (daily percent changes). Such a high correlation didn’t occur since December 2010. Since Australia is among the largest non-OPEC exporter of oil, its role in the world oil market might have an effect on the current changes in oil prices. Since we are only in the middle of April, its correlations should be marked with an asterisk. As the month will progress it will be interesting to check if this correlation between AUD/USD and oil prices will hold out. 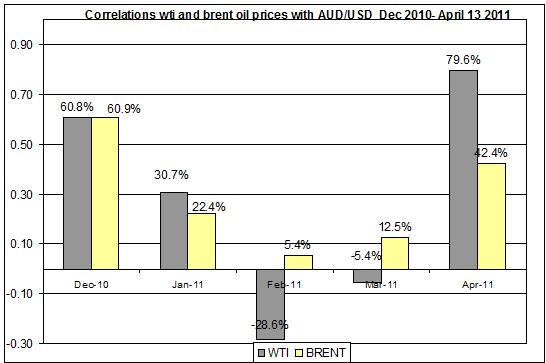 The fighting between the rebels and Qaddafi’s troops continue, and according to Bloomberg, the rebels are seeking to borrow 2 billion USD in order to maintain their standings.

It was confirmed by Qatar that the rebels sold to it crude oil, earlier this month.

The Libya’s oil production has declined substantially since February, when the conflict between the rebels Qaddafi began. The recent rise in oil output may raise Libya’s oil production, which was before the conflict around 1.65 million bbl/d. To cope with this drop in production, Saudi Arabia increased its oil output in the first quarter of 2011 by an average of 310,000 bl/d to 8.88 Mbl/d.

The EIA published yesterday its weekly report on petroleum stocks: According to the report, US petroleum stocks declined and reached 1,768 million barrels (For the full petroleum report review and analysis, see here). 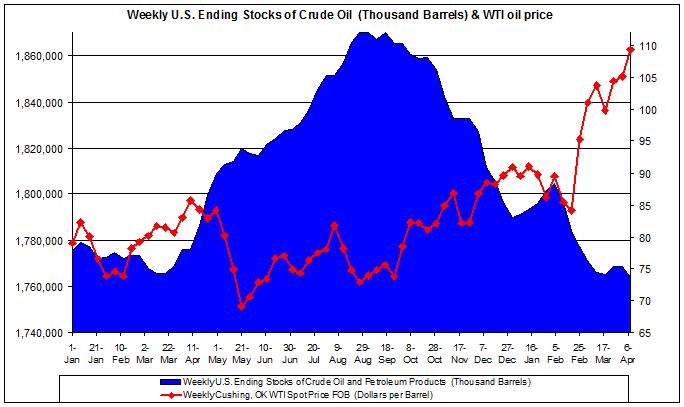 This chart above shows that despite the rising oil prices in recent weeks, the oil stocks continue to fall which suggests that the US oil demand is still high.

Major oil prices are traded in the European markets with moderate rises:

The zigzag in oil prices in recent days, only shows how oil prices fluctuate with no clear trend, as part of the high uncertainty in the oil market.  I speculate crude oil prices will remain high; in the short term, all things being equal, they will show moderate fluctuations, with no clear rend as the week will progress.

Difference between Brent oil and WTI spread: as of yesterday, April 13th, the premium of Brent oil over WTI rose to 15.66$/b.

The premium started to rise above the 15$ mark it was at in the past month.  This might be shift back to Brent oil rising more than WTI oil. I speculate that this shift might continue in a slow pace so the range might remain around the 14-17$ during the week. See below the chart of the premium of Brent oil over WTI in 2011: 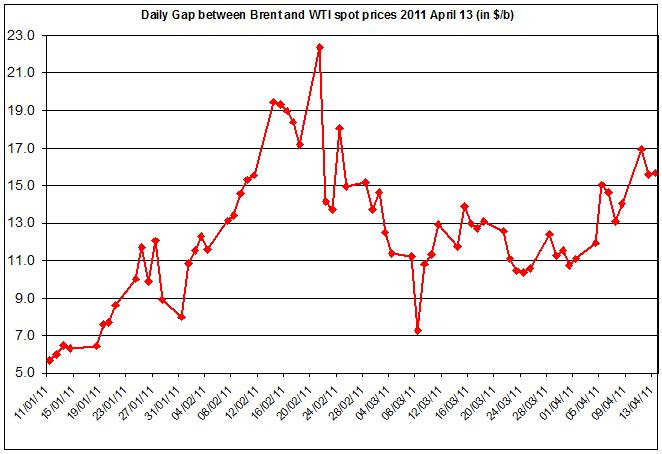 Also notice there has been a rise in the variance of the Brent premium over WTI during April as it reached 3.59, compared to 2.37 during March. 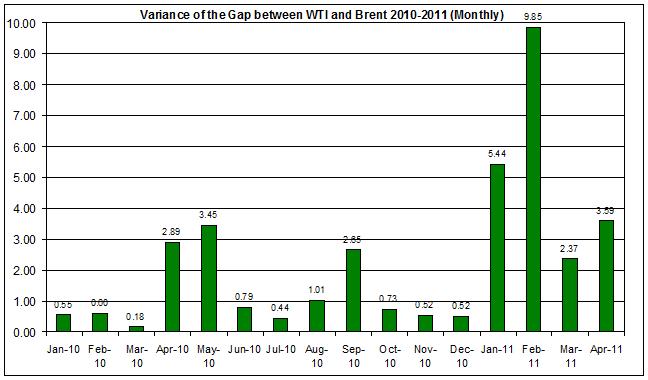 All day – Meeting of IMF and World Bank