Oil prices started off the week with moderate changes but will the recent events in the Middle East affect the stability of the commodities markets including the crude oil market?

Here are main news items for today, April 26th that might affect the crude oil market: 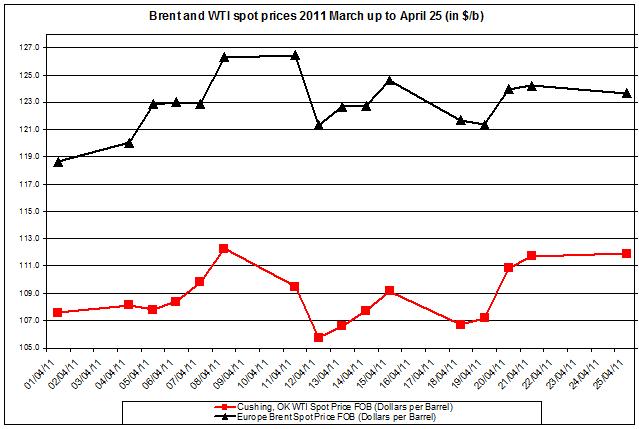 The current correlation between Brent oil and WTI spot oil daily percent changes is still high and is at 0.77, which is higher than last month’s correlation of 0.60 as seen in the chart below. 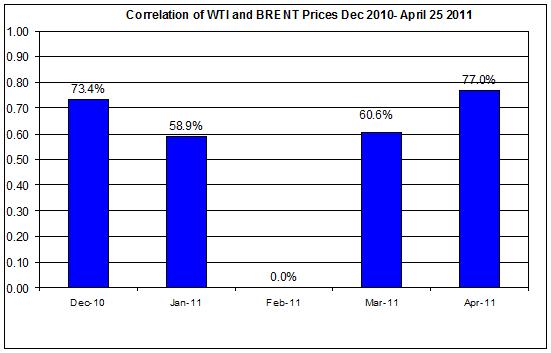 The war in Libya had a clear effect on oil prices as it pushed oil prices up since February 15th up to date by 34.6% for WTI spot price and 20.7% for Brent oil. Most of the rise occurred during February and March (some of it might have to do with the tsunami attack on Japan).  Since then, the events in Libya kept oil prices at their high level, but didn’t contribute much to increase oil prices during April.

According to Reuters, there are heavy fighting in Misrata between Gaddafi’s troops and the rebels’ forces.

There is a report that Libyan oil firms in Zueitina and Sirte, East of Libya may resume their oil production, according to rebels’ report.

During the Libyan war, Libya’s oil production had fallen from 1.6 million barrels per day back in mid February 2011 by nearly 1.3 million bbl/d.

Saudi Arabia is claimed to be concerned with the high oil prices that might slow down the economic growth rate of major economies.

In the past several days, there are several reports coming from Saudi Arabia with mixed signals such as its concern about oil priced being too high on the one hand, and that Saudi Arabia will keep its current oil production of 12.5 million barrels per day. These mixed signals, I think, should be taken skeptically.

Bashar al-Assad, current President of Syria, has ordered tanks and armored cars to enter Daraa, a city south of Syria. At least 400 people died during the violent confrontations nationwide during the last several days, and thousands of people were denied to cross the Syrian boarder to neighboring country Jordan.

U.S. is considering implementing some sanctions against Syria because of the violent forces used on civilians.

This escalation in the stability in Syria might further contribute to the instability of the Middle East and might even have some effect the financial markets.

The violent protests against President Ali Abdullah Saleh continue even though he was willing to resign from his Presidency within a month in exchange for immunity against any future prosecution.

The protestors don’t agree with Saleh’s concession as the demonstrators in Sana and the president’s unconditional resignation.

Major oil prices are currently traded in the European markets with mixed trends:

Crude oil prices started off the week with mixed trend and no clear pattern). The events in the Middle East don’t seem to affect the financial markets and commodities markets for now as oil prices are high and already incorporate most of the uncertainty that is attributed to the instability in the Middle East

Therefore I still speculate that WTI oil price will continue to increase but very moderately along with Brent oil; Furthermore, crude oil prices might remain at a high level, but in the mid to long term will eventually come down, once the uncertainty around the supply of oil will dissipate.

Difference between Brent oil and WTI spread: as of yesterday, April 25th, the premium of Brent oil over WTI declined to 11.79$/b- the lowest level since April 4th.

The premium of Brent oil over WTI continues to slide as seen in the chart below. This is still a double figure gap but it’s still early to conclude if this recent decline will be the start of the closing of the gap between these two energy prices; for now I speculate that the premium might continue to moderately decline and range between 10 and 13 USD during the rest of the week. 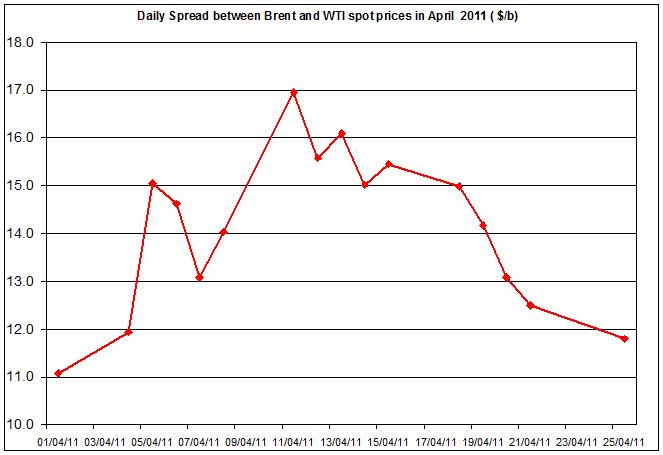 13.30 – US Department of Commerce – Report on Durable Goods