Crude oil prices changed direction and sharply fell during most of last week. This recent decline might shift back to gains if the recent news from the Middle East including the sanctions posed by U.S. on Iran will affect the oil exports and productions.

Here’s an outlook and analysis of the crude oil market for the week of November 21st to November 25th:

The chart below presents the development of WTI spot oil and Brent oil prices during November (prices are normalized to October 31st). 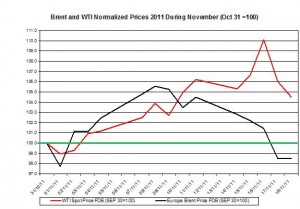 The premium of Brent oil over WTI spot oil sharply declined throughout the week and reached on Friday to $10.50. During November the premium fell by 35.70%. 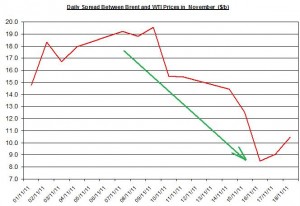 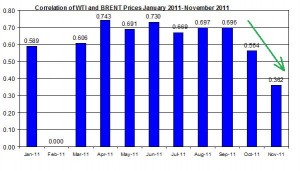 If the crude oil stockpiles will decrease again it may further pressure the WTI oil price to rise.

The new report will be published on Wednesday, November 23rd.

The chart below shows the petroleum and oil stockpiles levels compared to the WTI crude oil price in 2010 and 2011. 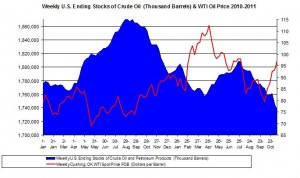 The EURO/USD exchange rate declined during last week by 0.80%; this trend continues the downward trend of the Euro against the USD along with other forex exchange rates including the AUD/USD and USD/CAD. If the U.S dollar will continue to appreciate against the Euro, this may also affect crude oil prices to further decline.

The S&P500 index declined during last week by 2.89% to reach 1,215 on Friday; during recent months there was a strong positive correlation between crude oil prices and S&P500 index (e.g. during November the correlation with WTI oil price was 0.499 and with Brent oil 0.757).

If the American stock markets will continue to decline as they did during last week, it may also contribute to the falls of crude oil prices. 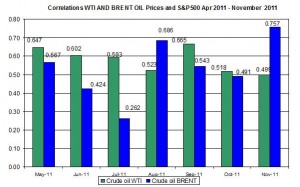 Crude oil prices shifted direction from the sharp gains they have experienced at the first couple of weeks of November and sharply declined during last week. The American stock markets continue to strongly affect the movement of WTI oil price. The recent developments in the Middle East might rekindle the fear of disruption in oil production that could pressure crude oil prices to rise again. On the other hand, the rapid political changes in Europe over the debt crisis and the talks in the U.S. over budget cuts during the upcoming week may further reduce crude oil prices. The forex market will likely to continue playing a role in the development of crude oil prices.

I speculate that during the upcoming week, WTI oil price will revolve around $93-$99 mark and Brent oil price around $103-$109.