Crude oil prices finished the week with moderate changes on Black Friday. There are several reports that will be published during the upcoming week and could affect not only the stock and forex markets, but also energy prices including crude oil price.  The reports include U.S. new home sales report, U.S. consumer Confidence report and U.S. PMI Manufacturing. The oil stockpiles continued to decline during last week and might continue this downward trend in the upcoming report.

Here’s an outlook and analysis of the crude oil market for the week of November 28th to December 2nd:

The chart below presents the development of WTI spot oil and Brent oil prices during November (prices are normalized to October 31st). 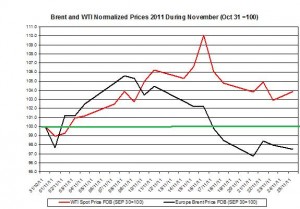 The premium of Brent oil over WTI spot oil declined during last week and reached on Friday to $10.00. During November the premium fell by 38.76%. 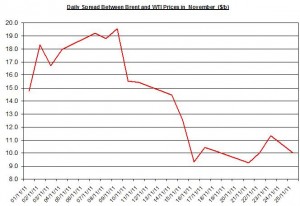 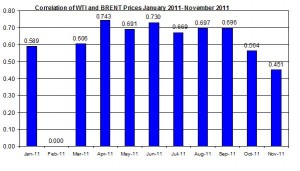 The new report will be published on Wednesday, November 30th.

The chart below presents the petroleum and oil stockpiles levels compared to the WTI crude oil price in 2010 and 2011. 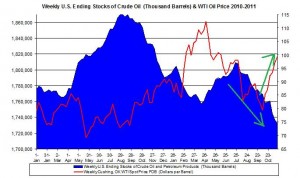 The EURO/USD exchange rate fell during last week by 1.86%; this trend continues the depreciation of the Euro against the USD along with other forex exchange rates including the Australian dollar and British Pound. If the U.S dollar will continue to appreciate against the Euro, this may also affect crude oil to trade down.

The S&P500 index fell during last week by 2.88% to reach 1,158 on Friday; during recent months there was a strong positive correlation between crude oil prices and S&P500 index (e.g. during November the correlation with WTI oil price was 0.562 and with Brent oil 0.681).

If the American stock markets will continue to fall as they did during last week, this downward trend may also pressure down crude oil prices. 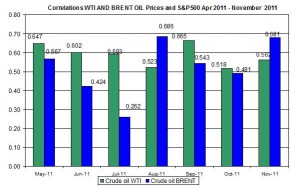 Major crude oil prices are currently traded sharply up in the European market:

Crude oil prices didn’t do much during last week, much like many other commodities prices. But this price stagnation might be broken depending on the ongoing news from the U.S. in regards to the budget cuts and the market sentiment in regards to the European debt crisis. The American stock markets are still strongly correlated to WTI oil price. If the news from Europe and U.S will adversely affect the stock markets, the oil prices may also decline. The forex market will likely to continue affecting the development of crude oil prices as presented above.