Crude oil prices sharply declined during last week after oil prices had moderately inclined during November and October.  The recent FOMC meeting stirred up the commodities markets and may have been among the factors to push down crude oil prices, while other news items from the U.S such as the improved Philly Fed index may have helped curb the drop in oil prices. This week started with the news from North Korea and the death of Kim Jong Il. It’s not clear yet how, if any, this news may affect the stability in the region and thus the financial markets.

Here’s an outlook and analysis of the crude oil market for the week of December 19th to December 23rd:

The chart below presents the development of WTI spot oil and Brent oil prices during the month (prices are normalized to November 30th). It shows the decline of both energy prices during last week. 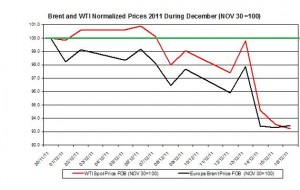 The premium of Brent oil over WTI spot oil inclined during last week and reached on Friday to $10.53. That being said, during December the premium fell by 3.92%. 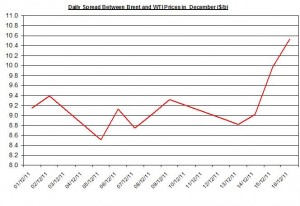 Despite the ongoing sharp shifts in the premium of Brent oil over WTI oil prices, the correlation between the daily percent changes of Brent oil price and WTI oil price sharply rose during December and reached its highest monthly correlation in 2011. This means that the relation between WTI and Brent oil prices has tighten, and thus might indicate that global and financial news (such as the EU debt crisis updates and FOMC meeting news) affected energy prices more than regional news, which are related to crude oil market (such as changes in U.S.’s crude oil stockpiles). 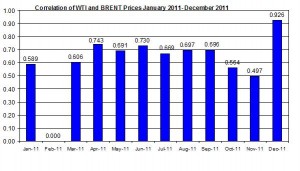 U.S GDP 2Q 2011 (last estimate): In the preliminary estimates the 3Q2011 GDP growth rate was 2.0%, compared with a 1.3% growth rate at 2Q2011. This shows a slightly higher growth rate for the US’s GDP even though the recent Q3 growth rate estimate was revised down; another revision may affect energy traders (for the previous estimate of 3Q GDP).

U.S Core Durable Goods Report: This monthly report will examine the changes in U.S. orders of durable goods in the manufacturing sector during November 2011. This report may indirectly present the changes in U.S. demand for crude oil. During October 2011, manufactured durable goods declined by $1.4 billion to $197.7 billion; Non-defense new orders for capital goods also decreased by $3.5 billion or 4.6% to $71.6 billion (for the full report);

The chart below shows the development of petroleum and oil stockpiles and WTI crude oil price during 2010 and 2011. 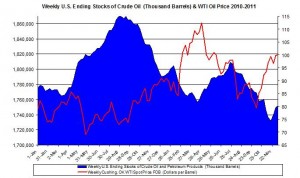 If the American stock market indexes will rally from last week’s declines, this shift may also push up crude oil prices. 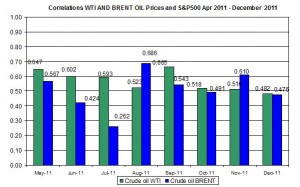 Major crude oil prices are currently traded moderately up in the European market:

Crude oil prices took a plunge and sharply dropped last week. This drop was recorded in other commodities prices such as gold and silver prices.

But the upcoming week might clam the energy markets, if there won’t be additional surprises from the U.S. and Europe.

If the upcoming reports (listed above) from the U.S. won’t be negative and continue to show improvement, then this could also help stabilize crude oil prices and even help them recover from last week’s decline.

I speculate that during the upcoming week, WTI oil price will revolve around $91-$98 mark and Brent oil price around $102-$109.