Crude oil prices only slightly slipped during last week, which is similar to their slow downward trend in recent weeks. What is up ahead for crude oil prices in the penultimate week of January? Let’s analyze the oil market and examine the main news items and events that may influence the crude oil market.

Here’s an outlook and analysis of the crude oil market for the week of January 23rd to January 27th:

The chart below presents the development of WTI oil and Brent oil  during January (prices are normalized to December 30th). It shows the sharp gain and fall of both oil prices during January. 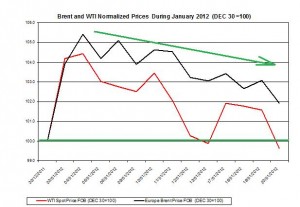 The premium of Brent over WTI  continued its business cycle like movement and reached on Friday to $11.17. During January the premium sharply rose by 27.66%. 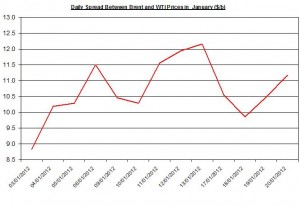 Despite the sharp rise in the gap between Brent oil and WTI oil prices, the correlation between the daily percent changes of  Brent price and WTI price remained high. This means that the relation between WTI and Brent oil prices is still tight in January as it was in previous months (in the chart below are the development of crude oil prices’ linear correlations). 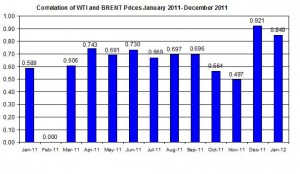 The standard deviation of the prices of oil has been declining in recent months as seen in the chart below; this finding suggests that the fluctuations in Brent oil price and WTI oil price have declined. 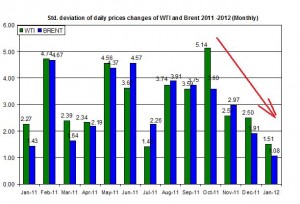 U.S. Pending Home Sales: This report present the changes in pending home sales in the U.S. for December 2011; in the November report the pending home sales index rose by 7.3%; if the housing market will continue to show signs of improvement it may also help rally oil prices;

U.S. New Home Sales: This report will show the changes in new home sales December 2011; in the previous report (November 2011), the sales of new homes rose by 1.6%;

The upcoming report will be published on Wednesday, January 25th and will refer to the week ending on January 20th.

The EURO/USD exchange rate sharply rose during last week by 1.98%, while AUD/USD also rose by 1.57%; the positive correlation between crude oil prices and Euro/ U.S dollar will probably continue playing a role in the oil market.  If the U.S dollar will further weaken against the Euro and Australian dollar during the upcoming week, it may also influence the direction of crude oil prices.

If the American stock market indexes will continue to rise during the the upcoming week, this may also help rally crude oil prices. 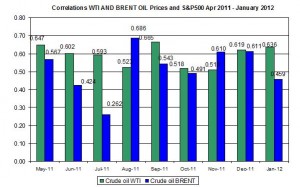 Crude oil prices didn’t do much last week; in fact, after their sharp gain at the beginning of the month they have changed direction and slowly slipped. This change in direction could be due to the growing concerns of a slowdown, mainly in the EU that could adversely affect the demand for oil. The growing tension between Iran and EU doesn’t seem to have much of an effect on the oil market for the time being.  In the upcoming week there are many news items that may influence the financial markets including the crude oil market such as the U.S. GDP growth rate, U.S. new home sales and the German business climate survey. Finally, if major exchange rates including EURO and AUD will continue to appreciate against the U.S. dollar, this may positively affect crude oil prices.