Crude oil prices bounced back and rose by over 2% after they had remained nearly unchanged a day earlier. Today Greece will decide on the budget cuts, but the news doesn’t seem to stir up the market for now. Related news that could affect crude oil prices today include the US petroleum stocks report by the EIA, and the US pending home sales.

Here’s a short analysis and outlook of the crude oil market for today, June 29th: 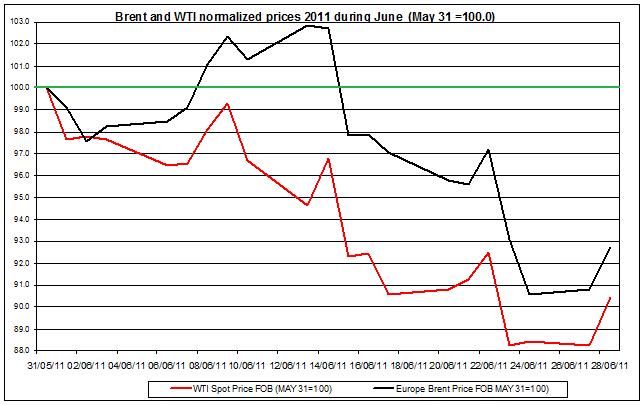 The premium of Brent oil over WTI spot oil remained nearly unchanged and reached on Tuesday June 28th $15.8/b; this gap rose by 9.12% during June. 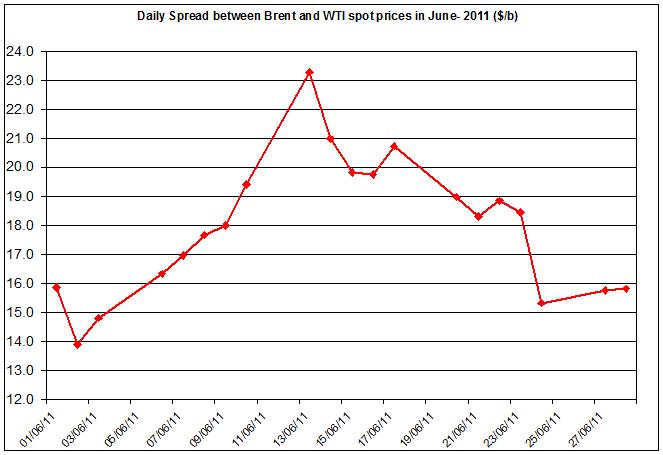 Following the spike in the premium of Brent oil over WTI on June 13th in which it reached $23.29/b, this premium fell to similar levels it was back in the beginning of June.

Today, the US home sales report will be published and will present the major changes in pending home sales during May 2011; in the recent report regarding April there was a decline in number of homes sold despite the rise during the March and February; this report is likely to show an ongoing decline in sales as the US economy is slowing down. If this will be the case, it might adversely affect crude oil prices: according to a research done by Roache et. al (2008) a working paper on the effects of news on commodities prices including crude oil prices, it was shown that a decline in the Existing home sales caused a significant adverse effect on crude oil prices the following day (a lag effect). If this will be the case, we might see a moderate downward effect on crude oil prices.

Today the Greek parliament will vote on the major budget cuts proposed by Greece’s Prime Minister George Papandreou. There is heavy opposition against these budget cuts, but Failure to pass these budget cuts could result in the European Union not approving the recent bailout funds Greece needs to avoid default of its loans. Since the Euros to US dollar is strongly correlated with crude oil prices, the changes that this exchange rate will endure due to the news related to the Greek debt crisis could possible also affect crude oil prices. Currently, the news from Greece doesn’t seem to affect Euro/USD.

Major crude oil prices are currently traded up at the Asian markets: