Crude oil prices are currently falling very precipitately; after WTI spot oil price declined for three straight days by a total of 3.7% and Brent oil by 4.7%, current oil prices (see below) show drops of nearly 6%. What is headed for oil prices today?

Let’s examine the recent news that is related (or adjacent) to the crude oil market for today, May 5th:

Yesterday May 4th, WTI spot oil decreased by 1.23%; this is the third straight day oil the WTI spot oil has been declining.

The premium of Brent oil over WTI reached yesterday 11.39$/b. During the last three weeks the spread ranged between 14.5$ and 11$ as seen in the chart below. 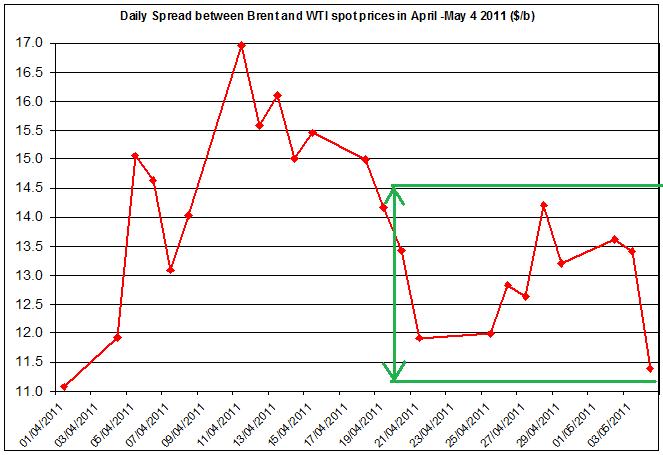 The variance of the premium of Brent oil over WTI rose from 2.37 during March to 2.5 during April. May started off at a low range of 1.51. In regards to May, while it consists of only three days, it still might indicate a decline in the fluctuations of this premium. 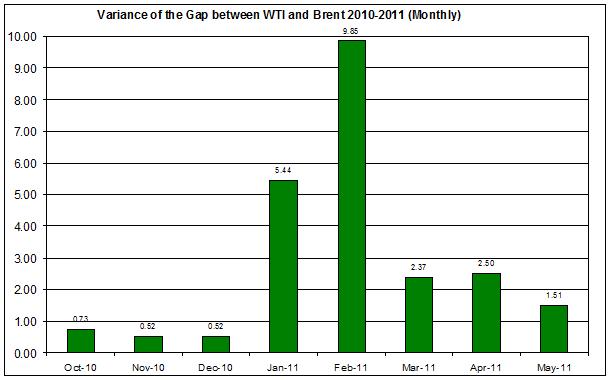 I still think that the premium will moderately fluctuate, but will remain around a double figure gap ranging between 10 and 13 USD.

According to Bloomberg, the UN is advocating a price control on crude oil prices to be set between the G20 and OPEC. If such an agreement will take into play it might help reduce the volatility of oil prices and might even moderate its rise.

The EIA published yesterday its weekly report on oil and petroleum: according to the recent report U.S. petroleum stocks continued to increase during last week by 7.5 million barrels, a 0.43% increase compared to the previous week. For the week ending on April 29th the oil stocks reached 1,767.6 million barrels. This was the largest injection since August 20th, 2010 (See here the recent petroleum report).

Currently most of the Libyan fighting takes place in the rebel-held city of Misrata where Gaddafi’s forces continue to strike the rebels.

See here for the recent news about Yemen and Syria.

According to the recent U.S. Geological Survey, there is a drop in the estimated Petroleum Reserve in Alaska. The current estimates of recoverable and undiscoverable oil ranges between 336 and 1,707 million bbl with a mean of 895 million bbl. The oil and gas discovery in Alaska will take at least 10 years for gas line pipeline and 20 years for the oil resources.

The news on the demise of Bin Laden

Major oil prices are currently traded in the US markets at rapid falls:

The crude oil price started off the month of May with falls, and is currently continues to drop over the gains registered in the US dollar against major currencies; the strengthening of the US dollar may have caused  the correction in the commodities markets and the  very rapidly drops in oil prices.  As we are exiting the cold weather in the US and Europe, the consumption of oil for heating purposes is likely to decline. This might also affect the drop in future and spot prices.

Nevertheless, I still speculate that crude oil prices will remain high at the three digit level, but in the mid to long term will start to come down (as it does now), as the uncertainty around the supply of oil from the Middle East (mainly in Libya) will dissipate.