Crude oil prices didn’t change much during the past couple of weeks; last week wasn’t any different as crude oil prices moderately declined after they had moderately inclined the week before. The US GDP 2011 Q2 didn’t grow by a high rate (only 1.3%); this news might have affected traders to trade down crude oil prices on Friday. By the end of the week, Brent oil price lost 1.23% of its value, and WTI spot oil declined by 3.3%, resulting in the spread between Brent oil and WTI oil reaching $21.11/b on Friday.

Let’s review the changes during last week (July 25h to July 29th) of crude oil prices (Brent oil and WTI), and present a summary of the recent EIA petroleum report:

Brent spot oil price also declined by 1.23% during the week, and the average price fell by 0.60% compared with previous week’s average.

The difference between the Brent and WTI spot prices moderately declined during the week and averaged at $19.67; it finished the week at $21.11.

The high gap between Brent oil and WTI spot oil continues to suggest that the European oil market is still tighter than in the U.S. oil market.

The chart shows that both Brent spot oil price and WTI spot oil didn’t change much during the week with a very moderate downward trend. 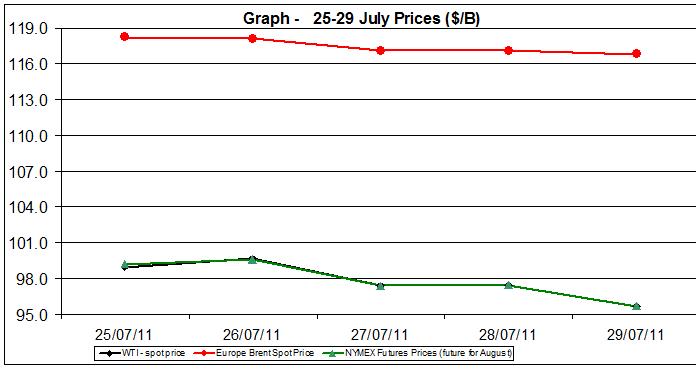 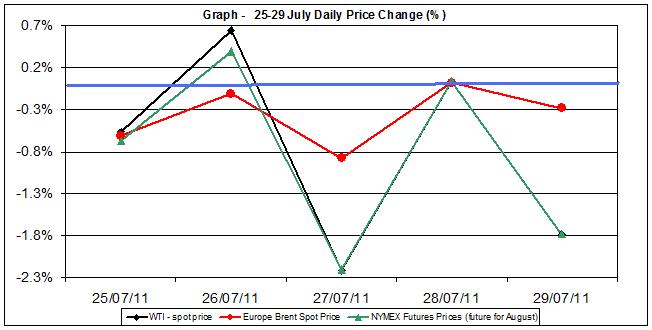 As seen above, WTI spot oil and Brent oil zigzagged during the week: the WTI spot oil has recorded moderate rises on Tuesday, but during the rest of the week it has declined, mainly on Wednesday and Friday.

For the week ending on July 22nd according to the recent EIA report of the US oil market, the US petroleum stocks sharply rose by 9.16 million barrels and reached 1,809 million barrels – the highest stockpiles since December 10th, 2010.

The chart below shows the upward trend since the end of April of petroleum and oil stocks compared to the WTI crude oil prices during 2010- 2011. 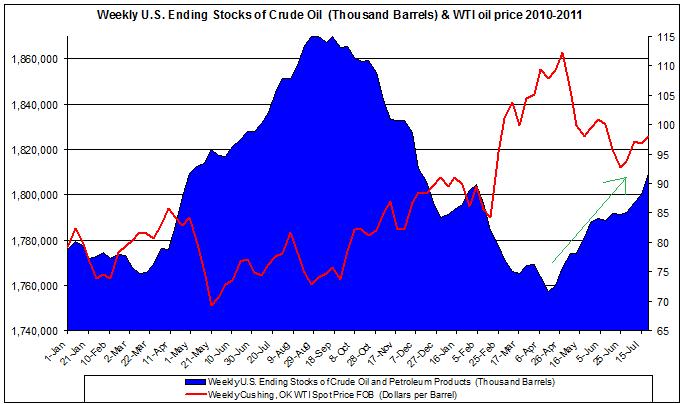