The crude oil market had very turbulent times with sharp falls during most of last week especially on September 22nd when WTI spot oil price shed 6.4% of its value. This was the sharpest drop in a single day for crude oil prices since May fifth when crude oil price (WTI) declined by 8.18%.

Crude oil, much like the rest of the financial markets investments, sharply fell on Thursday; many speculate that the catalyst for this adverse market reaction was the Fed’s decision to purchase long term securities and to sell (at the same amount) short term securities. The market seems it had expected a more robust and substantial stimulus plan.

By the end of the week, Brent oil price shed 5.54% of its value and WTI spot oil precipitately declined by 7.14%; as a result, the spread between Brent oil and WTI oil reached $27.06/b on Friday.

Let’s review the changes during last week (September 19th to September 23rd) of crude oil prices (Brent oil and WTI), and present a summary of the recent EIA petroleum report:

NYMEX Futures Price (October delivery) slipped by 0.26% during the week, and reached $87.96/b on Friday, September 23rd

Brent spot oil price also sharply declined by 5.54% during the week and the average price fell by 3.89% compared with previous week’s average.

The premium of Brent over WTI spot prices slightly inclined during the second part of week; during the week it averaged at $26.86; it finished the week at $27.06.

Notice that there was a rise during the second part of the week in the Contango (the gap between the future contracts (short delivery) and spot oil price (WTI) as it reached on Friday $0.27 per barrel. This might suggest the markets are estimating a slight  increase in crude oil prices in October.

In the chart, Brent spot oil and WTI prices didn’t change much during the first part of the week, but on the past couple of days of the week they had sharply declined. 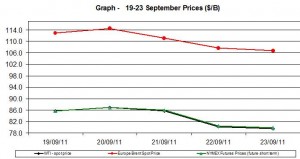 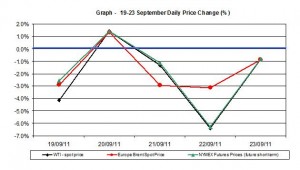 Brent and WTI oil prices declined on Monday; they bounced back with light gains on Tuesday and they declined throughout the remainder of the week.

According to the recent EIA report of the US oil market, for the week ending on September 16th, U.S. Petroleum and crude oil stockpiles declined last week by 0.30% and reached 1,774.0 million barrels.

The chart below shows the petroleum and oil stockpiles levels compared to the WTI crude oil price during 2010-2011. In recent weeks there was a downward trend on stockpiles and a moderate upward trend in WTI oil price. 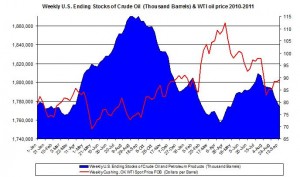