Crude oil prices have continued to moderately rise during last week as the turmoil in the Middle East took another turn for the worst, and the U.S. economy didn’t show much progress. These news items may have contributed to the slow rise last week in oil prices that are at a high level to begin with.

The adverse news from the Middle East, in which there was a further escalation in Syria, and the war in Libya between Gaddafi and the rebels and NATO forces continues with no clear ending in sight, all these items didn’t help to stabilize the Middle East and may have affected traders and investors to further push oil prices up.

Also, during last week, the US first quarter GDP estimate was released: it showed a moderate rise of 1.8%, which is less than expected; this figure also didn’t project well on the US’s economic recovery, despite the tireless efforts of the Federal Reserve to pull the US economy off its slowdown.

Here is a recap for the week ending on April 29th on crude oil prices (Brent oil and WTI), and a summary of the recent EIA petroleum report:

Europe Brent spot price rose by 1.93% from beginning to end, and its average price increased by 1.77% compared to previous week’s average.

The difference between the Brent and WTI spot prices reached on Friday 12.13$/b the average premium fell (compared to the previous week) to 12.32$/b during the week with a standard deviation of 0.53$/b. 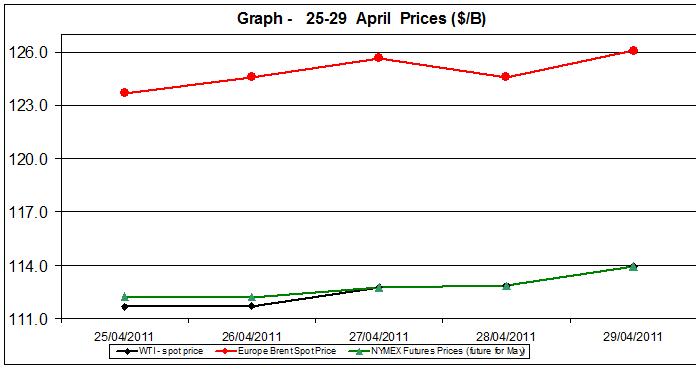 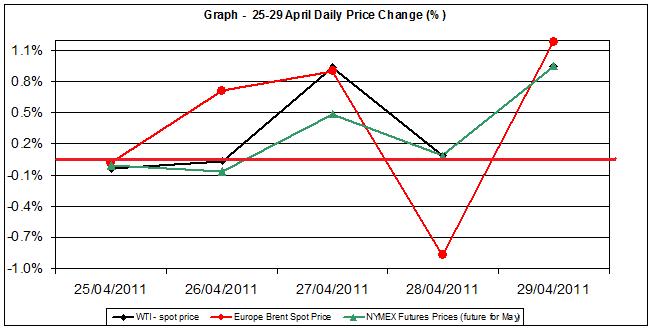 The graph shows that Brent oil fluctuated much more than WTI prices did during the week.

On last week’s published EIA report, about petroleum stocks, consumption and production: U.S. Petroleum and oil stocks bounced back and rose by 2.9 million barrels, which is a 0.17% incline compared to the previous week.  For the week ending on April 22nd the stocks reached 1,760.1 million barrels.

The chart below presents the petroleum and oil stocks levels compared to the WTI crude oil prices in 2011. 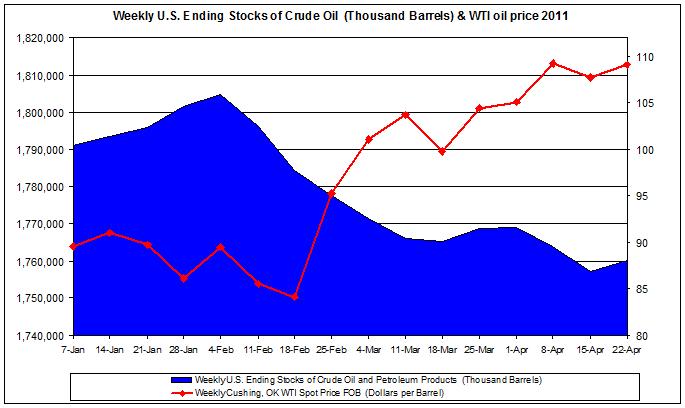 The national average Diesel prices fell by 1 cent compared to the previous week as it reached 4.10$/g. which is still 1.02$/g higher than last year’s average price at same time.

In total, during last week there were rises in US production, petroleum stocks, imports and oil prices, and a decline in refineries inputs.