Crude oil prices had a very sharp fall during the week as the Euros to US dollar exchange rate also fell due to the concerns over the Greek debt. There is still high uncertainty over the crude oil supply and whether Saudi Arabia will raise its oil production quota despite the disagreement in the recent OPEC meeting (after all during May Saudi Arabia didn’t raise its oil production). There are mixed views on the expected growth in oil demand for the rest of 2011: the IEA raised its projection of crude oil demand in 2011, but the recent slow down in US, Europe and China’s economies may adversely affect their demand for crude oil.

Let review the changes during last week (June 13th to 17th) of crude oil prices (Brent oil and WTI), and present a summary of the recent EIA petroleum report:

The difference between the Brent and WTI spot prices rose sharply and averaged at $20.52 as it finished the week at $20.48.

These findings suggest that despite the drop in crude oil prices, there might be a tighter oil market in Europe than in U.S. which could interpret the widening of the gap between Brent oil and WTI spot oil.

The chart shows a downward trend for WTI and Brent spot oil prices during the week. 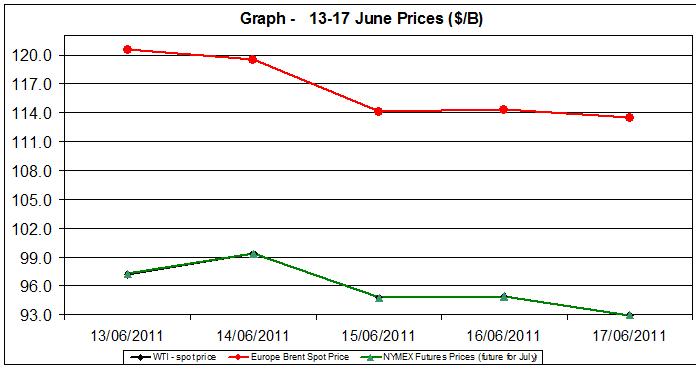 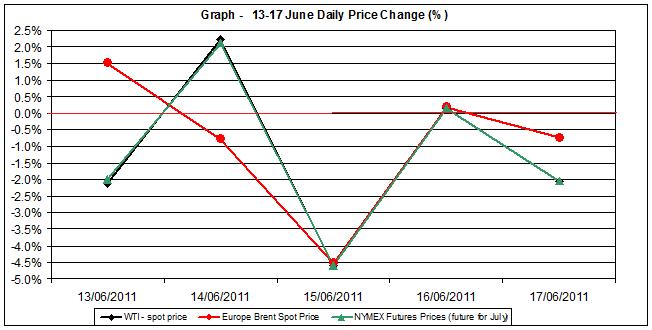 This chart shows that Brent oil started off the week with moderate rises and on Wednesday Brent oil and WTI spot oil fell sharply, in part due to the appreciation of the US dollar compared with major currencies including Euros and Canadian Dollar.

In last week’s EIA report about petroleum stocks, consumption and production, U.S. Petroleum and oil stocks moderately declined for the first time since April 15th; during last week the stocks fell 622 thousand barrels, or by 0.03%. 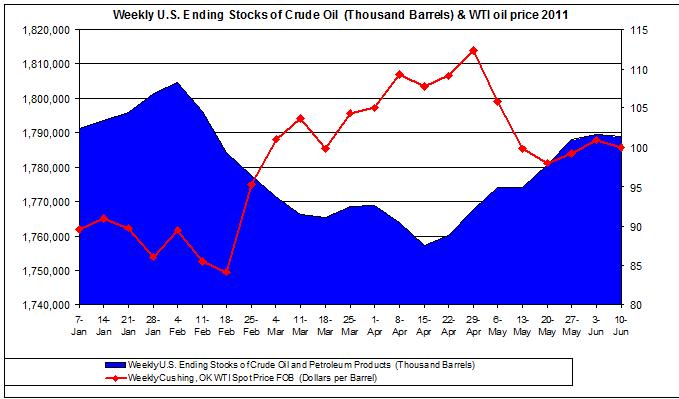