Following the sharp gains recorded on the first business day of 2012 for both gold and silver prices, gold price continued to rise while silver price changed direction and moderately declined.  The Euro also depreciated against the US dollar. France plans to sell today as much as €8 billion worth of debt. If this debt sale won’t go well, it could also have an adverse effect of the Euro. Currently, gold and silver are traded slightly up. Today, the Euro Area Industrial New Orders report will be published, ADP’s estimate of U.S. non-farm employment, U.S. ISM Non-Manufacturing PMI and U.S. Unemployment Claims report.

Here is a market outlook of precious metals prices for today, January 5th: 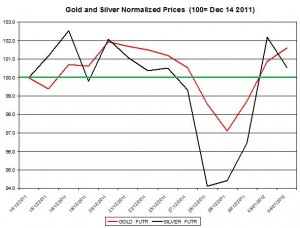 The ratio between gold and silver prices rose on Wednesday, January 4th and reached 55.42. During January the ratio slightly declined by 1.3% as silver price has outperformed gold price. 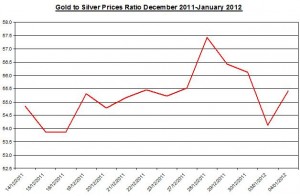 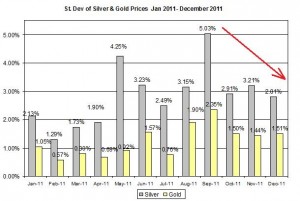 According to the recent Eurostat report the Euro Area inflation rate slightly slipped by 0.2 percent points to reach an annual inflation rate of 3% in December 2011.

This decline comes despite the recent cuts in the ECB’s interest rates. The Euro is currently traded down. The Employment in the EU is also down by 0.1% during the third quarter of 2011. These reports may have been among the factors to adversely affect the Euro yesterday, as these reports suggest that the economic progress of the EU is slowing down, and thus this news may have curbed the recent rally of bullion prices.

Euro Area Industrial New Orders: This report shows the changes in industrial new orders during October 2011; in the previous report regarding September the EU industrial news orders index fell by 6.4%. This index may provide as another indicator to the growth of the EU economy and could influence the Euro/USD exchange rate consequently gold and silver prices;

ADP estimate of U.S. non-farm payroll: ADP will provide an estimate for the U.S employment change during the month of December;

U.S. Unemployment Claims: initial claims rose by 15,000 to 381,000 claims for the week ending on December 24th; the number of insured unemployment inclined by 34k to 3.601 million during the week of December 17th;

U.S. ISM Non-Manufacturing PMI: This report will show the development of non-manufacturing sector during December 2011. During November this index slightly fell to 52%; this index might affect forex and commodities traders (see here last report).

The Euro to U.S Dollar changed direction and sharp decreased by 0.82% to reach 1.2944; other forex exchange rates such as the Canadian dollar also depreciated against the U.S dollar. If major currencies will continue to depreciate against the U.S. dollar, it may also pressure down gold and silver prices.

The major precious metals are currently traded slightly up in the U.S. markets:

Gold price continued to trade up in January and even though silver price declined yesterday, it is still well above its initial price level.  I speculate that if the “risk currencies” including the AUD and Euro will start to depreciate against the US dollar, it may pull down gold and silver prices. Furthermore, if the upcoming U.S. reports will show an improvement it might help appreciating the US dollar and consequently pressuring down precious metals prices. Finally if the upcoming French debt sales won’t go well, it could have a negative effect on the Euro, which in turn may also pressure down gold and silver prices.