Gold and silver prices started the first trading day of 2012 with very sharp gains. These gains were not only in commodities markets, but also in the American stock markets. It seems that the recent positive reports on the growth in the manufacturing sectors in the U.S. and China helped push up the financial markets. The January effect may have also played a role in this rally. Currently, gold and silver are traded up. Today, the Euro Area Annual Inflation report will be published, U.S. Factory Orders and the Australian Trade Balance report.

Here is a market outlook of precious metals prices for today, January 4th: 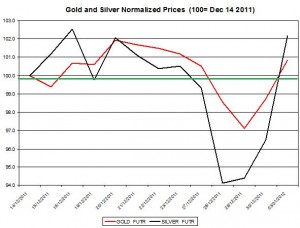 The ratio between gold and silver prices sharply fell on Tuesday, January 3rd and reached 54.12. During the past couple of weeks the ratio slightly slipped by 1.3% as silver price has outperformed gold price. 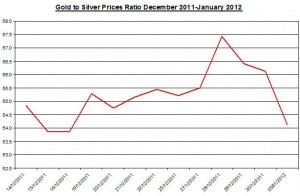 U.S Factory Orders: This report will examine the changes in U.S. factory orders of manufactured durable goods in November. This report may indirectly signal the changes in U.S. demand for commodities.  According to the recent flash report, during November new orders of manufactured durable goods increased by $7.5 billion or 3.8% to $207.0 billion; (for the full report);

Australian Trade Balance: The upcoming report will regard November 2011. In the October report, the seasonally adjusted balance of goods and services sharply fell from a surplus of $2,249 million in September 2011 to $1,595 million in October 2011 – a $654 million decrease. The export of non-monetary gold fell by $197 million (15%); if the gold exports will continue to fall in October, it might suggest a decrease in demand for non-monetary gold that could explain the decline in gold prices (see here last report);

The Euro to U.S Dollar started the year with a sharp increase of 0.69% to reach 1.3051; other forex exchange rates such as the Australian dollar also sharply appreciated against the U.S dollar. If major currencies will continue to appreciate against the U.S. dollar, it may also pressure up gold and silver prices.

The S&P500 index sharply rose on Tuesday by 1.55% to 1,277.06. During December, S&P500 index slightly roes by 0.85%. As presented in the chart below, the S&P500 index continues to be strongly and positively correlated to gold prices (during December the linear correlation was 0.681 with gold prices and 0.709 with silver prices), so that if the stock market will continue to rally not only because of the good news presented in the U.S. but also the due to the January effect, it may also indicate that gold and silver prices are likely to follow and rise as well. 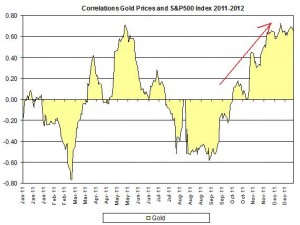 The major precious metals are currently traded up in the European markets:

Gold and silver prices started January on a positive note with very sharp gains. This rally comes after gold and silver prices declined during the last month of 2011 .This rally, however coincided with the sharp gains recorded in the U.S. stock markets, and other commodities prices such as crude oil prices; major currencies sharply appreciated against the U.S dollar. If the “risk currencies” including the AUD and CAD will continue to rise, it may help keep gold and silver prices up. Furthermore, if the upcoming U.S. and Australian reports will show an increase it could also help push up major financial markets and consequently may also pressure up precious metals prices. Finally, the January effect might continue to push up the stock markets, which, in turn, may also positively affect gold and silver prices.