There are reports that Saudi Arabia will raise its oil production in case the situation between Iran and the West will further escalate. Will Saudi Arabia come through on this promise? And more importantly, will it keep the crude oil prices from rising in case of an Iran war?

There are reports that Saudi could raise its oil production by as much as 25% in case the situation with Iran will take another turn for the worst. This news may have been among the factors to pull down crude oil prices yesterday.

But the friction between Iran and the West mainly the U.S. EU and Israel is probably among the reasons for the sharp rise in crude oil prices in recent weeks that reached as of yesterday $124.5 and $105.61 for Brent oil and WTI oil, respectively.

Even more than the sharp rise in crude oil prices, the difference between Brent oil and WTI oil price has increased in recent weeks after it had reached during December 2011its lowest level in almost a year. I suspect the rise in the Brent premium was mostly related to the Iran tension. 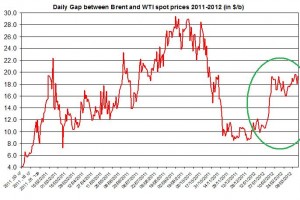 But we can’t blame the sharp gains in oil prices during the year so far entirely on Iran: according to the recent oil report of the IEA, the non-OPEC countries’ oil production didn’t increase much during the first quarter of 2012 partly because of unplanned outages in the North Sea and Canada. Furthermore, the OECD industry oil inventories are still below the 5-year average for the seventh consecutive month; this means that the oil market is still tight for OECD countries, mainly in Europe.

Following the recent sanctions on Iran the oil market in Europe just got tighter.

How are things in the U.S? the U.S. crude oil stockpiles are still 16.678 million barrels below oil stockpiles levels recorded during the same time in 2011.

But the oil production in the U.S is robust and in regards to oil imports, the U.S relies on counties in which there is no tension such as Canada, Saudi Arabia and Nigeria.

In regards to Asia the current sanctions on Iran won’t apply as U.S gave Japan China and several other countries a pass on the sanctions. Thus the global oil market shouldn’t see a sharp drop in supply because Iran could sell directly to China and Japan instead of the EU countries it once sold; alternatively OPEC counties such as Saudi could sell directly to Europe and reduce its sales to Asia.

But still, this plan looks well in theory; it will be a question how it will be executed.

Furthermore will Saudi raise quotas? We can look back on the case of Libya when oil production declined from an average of 1.6 million bbl per day in 2010 to nearly zero during March to November 2011.

So we know Saudi will probably abide and raise quotas, but will it be enough in a situation in which an Iran war will commence?

For that we need to consider two problems:

In case of an Iran war, there is the problem that Iran could follow on its threat and shut the Strait of Hormuz, where nearly 20% of the world’s oil is passing through. In such an event the rise in Saudi oil production won’t help.

The other problem is that Iran is a much bigger oil supplier than Libya.

As long as the tension with Iran will continue crude oil prices still have the potential of further rising and the Brent premium also expanding.

1 comment for “Will Saudi Arabia Bring Crude Oil Prices Down?”