As expected the European Central Bank lower again its basic interest rate by 0.25 percent points from 1.25% to 1.00%. This announcement clearly shows a paradigm shift in ECB’s way of thinking as the ECB seems more concerned and involved in dealing with the current European debt crisis and less with reaching the inflation rate goal set by the ECB at 2%. This shift is probably attributed to the decision made by current President of ECB, Mario Draghi who replaced the former of President of ECB Trichet a couple of months ago.

Mario Draghi and the rest of European Central Bank council convened today in Frankfurt and decided to cut again the Euro Area interest rate by 0.25 percent point to 1.00%. This is the second consecutive rate cut since the new ECB president Draghi replaced the former ECB president Trichet. 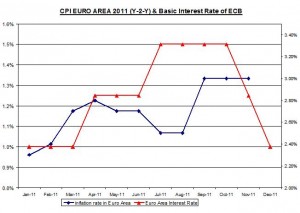 If the Euro Zone countries will start to show progress, the inflation pressures might start to rise.

On the other hand, in the follow up ECB press conference the ECB President didn’t promise any further bond purchase plans, i.e. a European quantitative easing. A QE program is something that many had anticipated resulting in the current falls in the commodities and forex markets .