As many had anticipated the European Central Bank kept again the basic interest rate at 1.00% for the third consecutive month; the last time ECB had cut the rate was back in December by 0.25 percent points. In the press conference President of ECB, Mario Draghi stated the EU inflation rate will continue to be well above the 2% ECB target for 2012.

Mario Draghi and the rest of European Central Bank council convened today in Frankfurt and decided to keep the Euro Area interest at 1.00%.

Mario Draghi stated in the press conference the bank’s outlook of the EU inflation in 2012 and 2013. According to the bank, the EU inflation, which is currently at 2.7% (slightly higher than the 2.6% in January 2011), will remain above the ECB’s target inflation of 2% in 2012. The bank projects the inflation will come down below the 2% mark by early 2013.

The chart below percents the development of the CPI of EU and interest rates of ECB during 2011-2012. 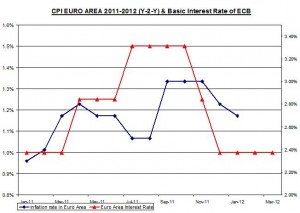 ECB also published its financial reports for 2011. According to the report, ECB’s net profit increased to €728 million (in 2010 it was €171 million) after ECB allocated €1,166 million to a risk provision. This positive news may have also been among the key factors in pulling up the Euro during the day.