The Euro Area GDP contracted by a rate of 0.3% during the fourth quarter of 2011; this drop in GDP is mainly due to the contraction of Germany’s economy during the quarter by 0.2%.

This contraction is the first time since the second quarter of 2009. During the third quarter of 2011, Euro Area’s GDP slightly rose by 0.1%; Germany’s GDP increased by 0.6%.

This report shows not only the economic activity in the Euro Area didn’t improve during the fourth quarter of 2011, but also it came short compared with the third quarter.  The report also showed that Germany – the strongest economy among the Euro Area countries didn’t present growth for the first time in 2011.

The chart blow shows the development of the quarterly growth rate of EU GDP in the past couple of years. 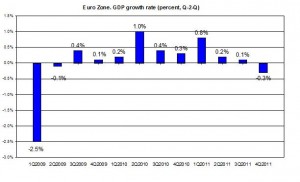 This news is likely to depreciate the Euro against the U.S dollar and other major currencies might follow. Furthermore, this news might curb some of the recent tall in energy commodities prices such as Brent oil prices.