The Euro Area GDP didn’t change, i.e. the growth rate remained flat during the first quarter of 2012; this stagnation in GDP is mainly due to the growth in of Germany’s economy during the quarter by 0.5% that compensated for the drop in other countries’ GDP, including Italy and Spain.

This figure by its self isn’t good news but the higher than expected growth rate of Germany’s GDP was a positive sign for the leading economy in Europe. As a comparison during the previous quarter, the German economy contracted by 0.2% (Q-O-Q).

This is still isn’t a positive report as Europe isn’t expanding, while other leading countries are showing signs of progress: as a comparison during the first quarter of 2012 the U.S GDP expanded by 2.2% (in annual terms), which is roughly 0.5% growth in (in Q-O-Q change).

There were also several countries in the EU27 that didn’t expand during the first quarter of 2012 including France and Bulgaria.

The chart blow presents the development of the quarterly growth rate of EU GDP in the past several years. 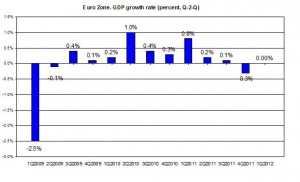 This news is likely to appreciate the Euro against the U.S dollar and other major currencies might follow. Furthermore, this news might curb some of the recent downward trend in energy commodities prices such as Brent oil prices. and precious metals such as gold and silver.