According to the recent Eurostat report the Euro Area inflation rate slightly slipped by 0.2 percent points to reach an annual inflation rate of 3% in December 2011.

This decline comes despite the recent cuts in the ECB’s interest rates. The Euro is currently traded down. The Employment in the EU is also down by 0.1% during the third quarter of 2011.

According to the flash report that was published today, the Euro Area inflation rate is estimated at 2.8% in December 2011 (annual terms). The rate declined from an annual rate of 3% in November 2011. 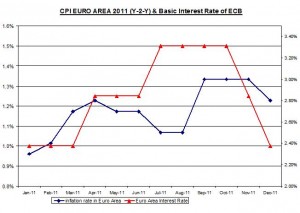 This news items might be among the factors for the current decline in the Euro/USD after this currency had increased on January 3rd, 2012.