I have already posted about the near paradigm shift in precious metals market as gold price sharply rose above the price of Platinum. Let’s reexamine this case and see if there was any change in the relation between these two precious metals.

The chart below shows the development of gold and platinum from August 2011 to March 2012. We can learn several things from this chart. At the beginning of August 2011, when the debate over raising the U.S debt ceiling was held and the S&P announced it will downgrade U.S.’s credit rating,  the price of gold picked off very promptly as many investors were seeking safe haven investments. Platinum, which is a precious metal, isn’t used as safe haven investments such as gold, therefore it didn’t rise following these said events occurred at the beginning of August. During August the prices of gold and platinum were very similar. 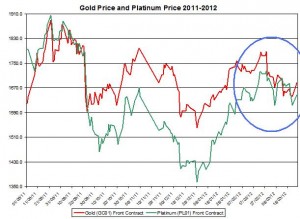 Following the sharp fall of both precious metals prices during September and October, the near paradigm shift occurred as gold price remained above the price of platinum. 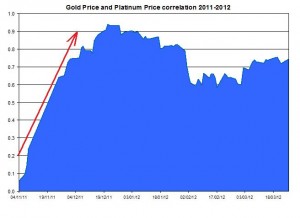 Circling back to the first chart, during the last couple of months as gold price had a downward trend, the gap between platinum and gold contracted and at certain days the price of platinum was higher than gold price.

This is a step towards a more sensible reality as gold isn’t substantially higher than the price of platinum. As long as the strong correlation between the two metals will continue to be robust I speculate their prices are likely to remain near each other. Until the next market shock that might push gold pricehigh again. Despite the sharp drop in gold at the beginning of the week following the publication of the minutes of the March FOMC meeting, there are still those who believe there might be a surprise in the upcoming FOMC meeting at the end of April (but I, as many others, don’t). In case of no additional stimulus plan this meeting might put platinum ahead of gold price or reopen the gap so that gold price will be higher again than platinum prices in the small chance there will be a big announcement in the next meeting.