Following the rapid falls in crude oil prices during last week, oil prices seem to bounce back with moderate rises. What is headed for oil prices today?

Let’s examine the recent news that is related to the crude oil market for today, May 9th:

During May, up to Friday May 6th, WTI spot oil decreased very sharply by 14.30%; WTI spot oil fell every day in May up to now.

Brent oil price also fell sharply during May by 13.22% and reached 109.85$/b – its lowest price level since February 23rd. The chart below shows the shift during last week in the trend of oil prices. 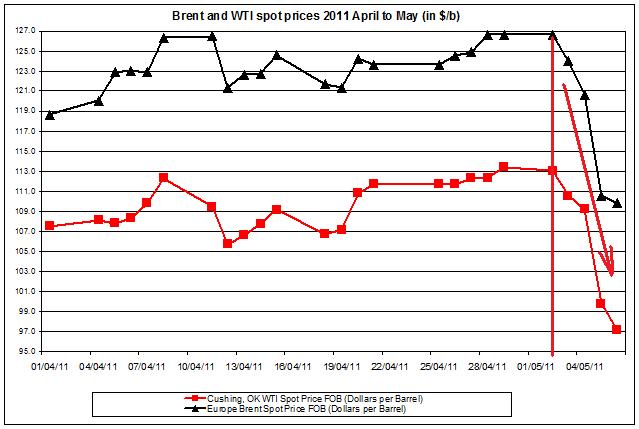 The premium of Brent oil over WTI reached on Friday 12.67$/b.

Despite the many fluctuations in crude oil prices, the premium of Brent oil over WTI spot oil remained around the 10 and 15$.

I still think that the premium will moderately fluctuate, but will remain around a double figure gap ranging between 10 and 13 USD.

The US dollar connection

The drastic declines of crude oil prices during last week was related, in part, to the appreciation  of the USD compared to major currencies including the Euro, Australian dollar and Yen.

As seen in the chart below, during May the above-mentioned currencies have a very strong correlation with crude oil prices including WTI spot oil and Brent oil.

Granted, we only have very few samples in May, and as such the correlations are likely to change during the month and are likely not significant, however this gives some perspective on the strong link the major exchange rates had during last week with the changes in crude oil prices (Brent oil and WTI spot oil). 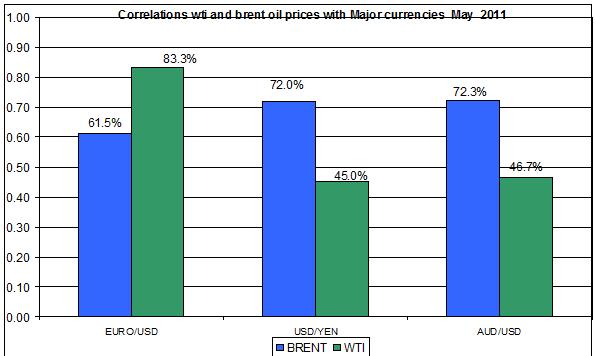 One of the reasons for this reaction of EURO/USD crashing by over 3% during May, might be related to the change in policy direction of ECB as ECB president – Jean-Claude Trichet didn’t raise the interest rate of ECB and the rate remained at 1.25%.  This change in policy seem to be related to the desire of ECB to keep the dollar strong even it means that the inflation in Euro zone will continue to rise.

Goldman Sachs head of commodity research thinks that following the pullback in crude oil prices during last week, this may create an opportunity for crude oil prices to make a comeback by the second half of 2011.  JP Morgan analysts also think that based on the current situation of OPEC not increasing its oil production to match the rise in expected demand, there may be a comeback in oil prices the second half of 2011.

In regards to the OPEC output, it’s not clear yet whether or not OPEC will raise its output in regards for the second half of 2011.

Most of the Libyan fighting continues to occur in the rebel-held city of Misrata where Gaddafi’s forces continue to strike the rebels.

During March, the total OPEC production fell by 626.7 thousands bbl/d compared to February 2011. Out of which the Libyan oil production declined by nearly a million bbl/d. The drop in oil production of OPEC might explain part of the rise in crude oil prices during March and April 2011.

The situation in Syria only continues to escalate: during the weekend, Syrian armed forces including tanks conquered the Syrian city of Banias, located in the northern part of Syria, and attacked the protesters against the current ruling of President – Bashar al-Assad.

The European Union reported that it will issue sanction against top Syrian   officials.

The turmoil in Syria is yet to affect the financial markets as the uncertainty in the Middle East is already high and Syria doesn’t have a major role in the oil or gas markets, but if there will be a further escalation in the region, it might also reflect in the financial markets.

Major crude oil prices are currently traded with rises in the European markets:

The current crude oil prices bounce back from the rapid falls they have experience during the second half of last week. This movement, in which, prices rise following a pull back, is common.  This week there are several events that are planned including the testimony of Ben Bernanke that might have an effect on traders’ perspective on oil prices and other commodities.

As we are exiting the cold weather in the US and Europe, the consumption of heating oil is likely to decline. This might also affect the drop in future and spot prices in the upcoming weeks to come.

Nevertheless, despite the downfall in major commodities, I still speculate that crude oil prices will remain near the 100$ mark; however in the mid term will start to come down (as it does now), as the uncertainty around the supply of oil from the Middle East (mainly in Libya) will dissipate.