There were reports last week of heavy snow in many parts throughout the US and Canada; e.g. last week in Tulsa, Oklahoma was the snowiest winter ever recorded.

In a nutshell, except for the New York City Gate spot price, which showed some increase early last week, the natural gas spot price Henry Hub and its future price fell all week.

Let’s check out the main figures for this passing week of 7th to 11th of February:

The Nymex Henry Hub Future Price (March delivery) also declined last week by 4.6% from beginning to end of the week; and its average price was 23.5% lower than last week’s average price.

Both these prices show the downward trend that was expected to happen during February and as the winter will subside in the US, the price will continue to decline (for more on the February natural gas prices outlook see here).

The backwardation (the spread between the future and spot prices, i.e. future minus spot) for Henry Hub declined during the week as it settled at the end of the week on -0.05$/mmbtu – the smallest spread this month. Nonetheless, the backwardation still might indicate the market is expecting the price of natural gas to decline next month.

This passing week’s average NY gate natural gas spot price fell by 9.2% compare to last week’s average price, however, the cold weather and snowfall during the beginning of the week caused a hike in demand and consequentially the NY city gate price, rose sharply by over 30% on Monday and Tuesday, only to fall the rest of the week resulting in a decline of ~34% from beginning to the end of the week. 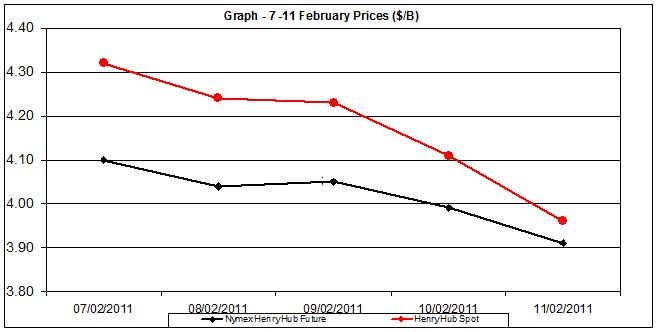 Domestic production of dry natural gas declined in the passing week to an average 5.4 Bcf/day, probably due to the freeze-off in the West, Mid-continent, and Gulf of Mexico regions.

In total, natural gas consumption inclined, while natural gas storage and production declined. The prices showed some resistance but in total fell.

← Weekly outlook for Crude oil, Natural gas and Gold 14-18 February
The gap between WTI and Brent continues to widen –February 14 →