The gold and silver continued their downward trend and declined for the fourth consecutive business day. Their recent fall coincided with the ongoing depreciation of certain currencies such as Japanese yen, Aussie dollar and Canadian dollar against the USD. The volume of trade picked up from Monday but remains low compared to last week. Will gold and silver bounce back from their recent fall? On today’s agenda: Bernanke’s Speech, U.S. Federal Budget Balance, U.S 10 Year Bond Auction, Great Britain Claimant Count Change, BOE Inflation Report, and BOE Governor Carney Speaks.

Here is a short overview for bullion prices for Wednesday, November 13th:

The ratio between the two precious metals rose on Tuesday to 61.18. During November, the ratio increased by 0.91% as silver has moderately under-performed gold. 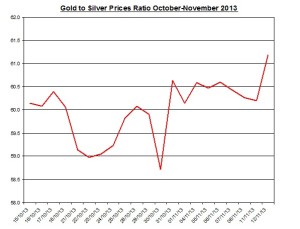 The gold and silver futures volumes of trade have risen from Monday and reached on Tuesday 165 thousand and 71 thousand, respectively. If the volume starts to further pick up in the coming days, this could imply the odds of sharp change in the rates of gold and silver as a result of low volume will rise.

U.S. Federal Budget Balance: This upcoming report will refer to October 2013; this report suggests the government debt growth and thus may affect the shifts in U.S dollar. In the latest report regarding September the deficit declined by $75 billion; if the deficit continues to contract, it could influence U.S policymakers their decision about next year’s budget cuts;

Great Britain Claimant Count Change: As of previous month, the number of unemployed in GB fell by 41.7k; the rate of unemployment remained unchanged at 7.7%;

BOE Inflation Report: Bank of England will release its quarterly report that includes the bank’s inflation outlook for 2013 and 2014;

Bernanke’s Speech: Chairman of the Federal Reserve Ben Bernanke will talks to educators in Washington, D.C.;

U.S 10 Year Bond Auction: The U.S government will issue its monthly bond auction; in the previous auction, which was held at the second week of October, the average rate reached 2.66% – the lowest rate since August 2013;

On Tuesday, the Euro/ USD currency pair slightly increased by 0.22% to 1.3436. During November, the Euro/USD fell by 1.09%. Conversely, other currencies such as the Japanese yen depreciated yesterday against the U.S dollar by 0.47%. The correlations among gold, silver and Euro remained strong in recent weeks, e.g. the correlation between the Euro/USD and gold price is 0.60 during October/November.  The chart below presents the linear correlations among leading currencies pairs and precious metals percent changes. 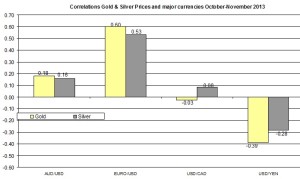