The highly anticipated debt ceiling breach didn’t come as President Obama was able to pass in both houses the vote to raise the debt ceiling and partly fix the budget by reopening the government until mid-January. The debt ceiling will last until February 7th. For now, crisis averted but the damage has already been made as people continue to lose confidence in U.S policymakers. This news is likely to help pull up U.S stock market for the short term but at the beginning of the year these issues will resurface and adversely affect market sentiment and confidence. This recent development could reduce the high volatility in the financial markets including precious metals and could resume the downward trend of precious metals. On today’s agenda: Euro Area Current Account, U.S. Jobless Claims, Philly Fed Manufacturing Index, Governor Stevens speaks, China Third Quarter GDP 2013, and China’s Industrial Production.

Here is a short overview for precious metals for Thursday, October 17th: 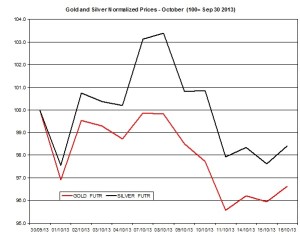 The ratio between the two precious metals slipped on Wednesday to 60.08. During October, the ratio decreased by 1.81% as silver has slightly out-performed gold. 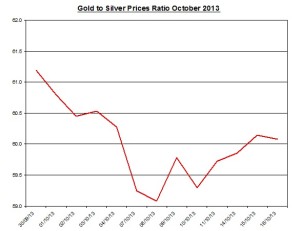 U.S. Jobless Claims Weekly Report:  In the previous report the jobless claims sharply rose by 66k to reach 374k; the next weekly update may affect the U.S dollar and consequently commodities and equities markets;

Governor Stevens speaks: Reserve Bank of Australia Governor is due to speak at the Australian British Chamber of Commerce Business Lunch, in Sydney; in his upcoming speech, the Governor may refer to the progress of the Australian economy and RBA’s monetary policy; this speech may affect the Australian dollar;

China’s Industrial Production: According to last month’s report, China industrial production grew to an annual rate of 10.4%; if the growth rate further rises, it may suggest China’s economy is progressing faster;

On Wednesday, the Euro/ USD currency pair inched down by 0.07% to 1.3534. During October, the Euro/USD slightly rose by 0.34%. Moreover, other currencies such as the Canadian dollar and Aussie dollar slightly appreciated yesterday against the U.S dollar by 0.27% and 0.53%, respectively. The correlations among gold, silver and Aussie dollar strengthened in the past couple of weeks, e.g. the correlation between the AUD/USD and gold price is -0.60 during September/ October. 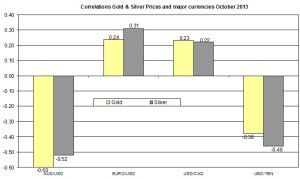