The gold and silver market continues to seek direction and much like last week, prices of precious metals have changed direction from Friday and bounced back. Their recent rally coincided with the recovery of the Euro against the USD. The U.S government shutdown continues and it seems that investors and traders have taken a step back until the uncertainty around this situation will be resolved. Will gold and silver continue to rise today? On today’s agenda: Switzerland’s CPI, German Factory Orders, Canadian Trade Balance, SNB Chairman Jordan’s Speech, and Minutes of Bank of Japan’s Monetary Policy Meeting.

Here is a short overview for bullion for Tuesday, October 8th: 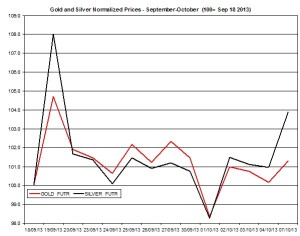 The ratio between the two precious metals declined again on Monday to 59.25. During October, the ratio decreased by 3.17% as silver has slightly out-performed gold. 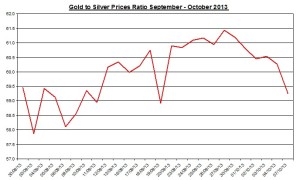 The gold and silver futures volumes of trade have fallen and reached on Friday 111 thousand and 25 thousand, respectively. For both metals these trade volumes are the lowest in the past several months. If the volume changes direction and rally this week, it could suggest the odds of sudden sharp change in the prices of gold and silver as a result of high volume will rise.

Switzerland’s CPI: In the last report, the consumer price index slipped by 0.1%; this was the second consecutive in which the CPI declined; if the CPI continues to fall, this may eventually affect the Swiss National Bank’s monetary policy;

German Factory Orders:. In the last update, the factory orders fell by 2.7% during August;

Canadian Trade Balance: In the previous report regarding July 2013, exports declined by 0.6% and imports grew by 0.6%; as a result, the trade balance’s deficit widened from $460 million in June to $931 million in July; this report may affect the Canadian dollar;

SNB Chairman Jordan’s Speech: The Swiss National Bank Chairman will give a speech; if he announces or implies of any potential changes to the bank’s monetary policy, this could affect the Swiss Franc;

Minutes of Bank of Japan’s Monetary Policy Meeting: Bank of Japan kept its monetary policy unchanged. The minutes may offer some insight referring to the future plans of BOJ; this news may affect the Japanese yen;

On Monday, the Euro/ USD currency pair slightly increased by 0.17% to 1.3581. During October, the Euro/USD rose by 0.69%. Conversely, other currencies such as the Aussie dollar and Canadian dollar slightly depreciated yesterday against the U.S dollar by 0.06% and 0.18%, respectively. The correlations among gold, silver and Euro have weakened in recent weeks, e.g. the correlation between the Euro/USD and gold price is 0.22 during September/ October. The chart below presents the correlations. 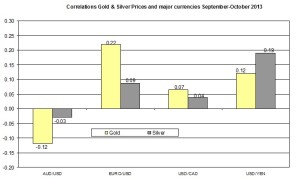 ← Will Natural Gas Rally from its Recent Fall?
Gold and Silver – Daily Outlook for October 9th →