After a few days in which both gold and silver prices didn’t do much, they have bounced back and sharply rose on Thursday. Their rally coincided with the recovery of leading risk related currencies against the US dollar such as Euro and Aussie dollar. In the U.S, jobless claims weekly update revealed that jobless claims rose by 5k to 333k. In Australia, rate of unemployment remained at 5.7%; the number of seasonally adjusted employed persons fell by 10.2k. This news didn’t stop the Aussie dollar from sharply rising yesterday against the USD. Some suspect the risk aversion in the forex market has diminished, which could keep pulling up risk related currencies and along with them commodities such as gold. Will the recent rally of gold and silver prices persist? On today’s agenda: China New Loans, Reserve Bank of Australia’s Monetary Policy Statement, China’s Industrial Production, French Industrial Production, and Canada’s Employment Report.

Here is a short breakdown for bullion for Friday, August 9th: 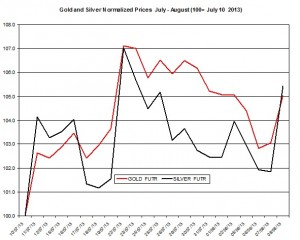 The ratio between the two precious metals decreased on Thursday to 64.88. During August, the ratio decreased by 2.97% as silver out-performed gold. 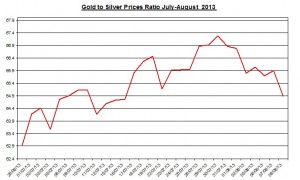 See here the weekly projection of gold and silver for August 5-9.

China New Loans: This report will pertain to the recent developments in China’s new loans. Based on the recent report, the total loans sharply increased rose again; this report is another indicator for China’s economic growth;

Reserve Bank of Australia – Monetary Policy Statement: The RBA will publish its quarterly report regarding the Bank’s monetary policy;

China’s Industrial Production: According to last month’s report, China production growth rate slipped to 8.9% in annual terms; if the growth rate will further fall it suggest China’s economy isn’t progressing as fast as it did;

French Industrial Production: This report will refer to July. In the latest update, the industrial production slipped by 0.4% during June;

Canada‘s Employment Report: In the latest employment update for June 2013, unemployment remained unchanged at 7.1%; the employment slipped by 0.4k during the month. The upcoming report might affect the Canadian dollar and consequently precious metals;

The Euro/USD currency pair slightly increased again on Thursday by 0.34% to 1.3381. During August, the Euro/USD edged up by 0.59%. Moreover, other currencies such as the Aussie dollar and Canadian dollar sharply appreciated yesterday against the U.S dollar by 1.17% and 0.91%, respectively. The correlations among gold, Euro, Canadian dollar and Aussie dollar remained strong, e.g. the correlation between the USD/CAD and gold price is -0.62 during July and August.

Current Gold and Silver Rates as of August 9th