The recent speculations around the potential progress in finding ways to end the U.S government shutdown may have contributed to the sharp rally of U.S stock market, US dollar and several commodities such as oil. On the other hand, gold and silver prices didn’t do much as gold slipped, while silver inched up. The coverage of the U.S government shutdown is crowding out other news items. The recent news is that GOP and Obama have started negotiations but no clear indication for progress has been made. In the U.S jobless claims sharply rose by 66k to reach 374k. Will gold and silver resume their downward trend? On today’s agenda: Canada’s Employment Report, China’s Trade Balance, and UoM Consumer Sentiment.

Here is a short review of precious metals for Friday, October 11th: 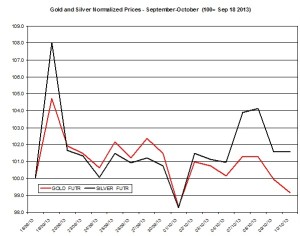 The ratio between the two precious metals declined on Thursday to 59.29. During October, the ratio decreased by 3.10% as silver has slightly out-performed gold. 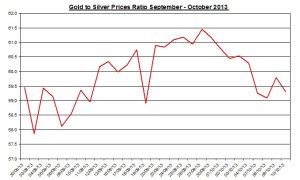 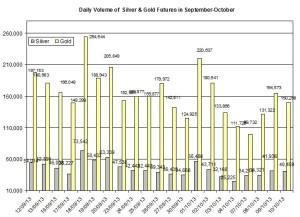 Canada‘s Employment Report: In the latest employment report for August 2013, unemployment remained inched down to 7.1%; the employment rose by 59.2k during last month. The upcoming report might affect the Canadian dollar and consequently commodities;

China’s Trade Balance: According to the latest monthly report, China’s trade balance rose to a $28.5 billion surplus; if the surplus further rises, it could indicate China’s economy is improving and thus may positively affect commodities;

UoM Consumer Sentiment (preliminary):University of Michigan will publish its preliminary consumer sentiment monthly report; this survey could offer information regarding the latest shifts in U.S consumers’ sentiment; According to the last report, the sentiment index fell to 76.8;

On Thursday, the Euro/ USD currency pair inched down by 0.03% to 1.352. During October, the Euro/USD rose by 0.24%. Conversely, other currencies such as the Japanese yen and Canadian dollar slightly depreciated yesterday against the U.S dollar by 0.84% and 0.04%, respectively. The correlations among gold, silver and Euro have remained weak in recent weeks, e.g. the correlation between the Euro/USD and gold price is 0.29 during September/ October.

Here is a reminder of the main events and publications that are scheduled for today (all times GMT):