The gold and silver market cooled down along with the rest of the financial markets as precious metals didn’t do much on a monthly scale. Even the recent FOMC meeting, in which the Fed decided to taper again QE3 by another $10 billion, didn’t stir up the markets. Looking forward, will gold and silver resume their downward trend? Let’s examine the upcoming events, decisions and reports that may stir up the precious metals market; let’s start, however, with a short review of the main developments during April.

Gold and Silver in April

Gold and silver prices didn’t do much during last month as they kicked off the month on a positive note only to change course and slowly decline in the last two weeks of April. Their unclear trend coincided with the low volatility in the forex market, in which the US dollar slightly depreciated against the Euro, Aussie dollar and Japanese yen. By the end of April, the price of gold rose by 0.95%; the price of silver fell by 3.06%.

The chart below shows the shifts of gold and silver during April, in which the prices are normalized to 100 on March 31st 2014. 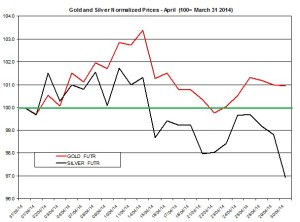 The recent FOMC meeting had a modest negative impact on the gold and silver; the minutes of this meeting could provide some additional information regarding the FOMC members’ deliberations and reservations from the recent decision. But the U.S economy seems to have slowly recovered in the past several months especially in the labor market. If the U.S economy keeps showing signs of progress as indicated in the forthcoming reports on employment, housing and manufacturing, then the demand for gold and silver could further diminish. Further, if equity markets keep slowly recovering, this could suggest more investors are pulling into equities and out of precious metals. The recent fall in GLD’s gold holdings signals the demand for gold as an investment softened. Therefore, the bullion market might start to slowly weaken.  Finally, China and India could also play a secondary role in the precious metals market. If these economies’ progress slows down, this could indicate a potential drop in the demand for gold and silver in these countries.

In conclusion, I think gold and silver may change course and start to slowly decline during May.