Gold and silver changed direction and after they had rallied on Monday, they pulled back down and fell on Tuesday. The FOMC meeting will end today, in which the FOMC will decide on any changes to its policy. If the Fed decides to change its monetary policy by tapering QE3, this could lead to decline in gold and silver prices. Otherwise, gold and silver might change direction again and rally. Besides the FOMC meeting, press conference and economic outlook on today’s agenda: MPC Asset Purchase and Rate Votes, U.S. Housing Starts and Building Permits, and Japanese Trade balance.

Here is a short overview for bullion for Wednesday, September 18th: 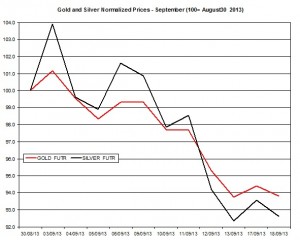 The ratio between the two precious metals rose on Tuesday to 60.22. During September, the ratio increased by 1.29% as silver has slightly under-performed gold. 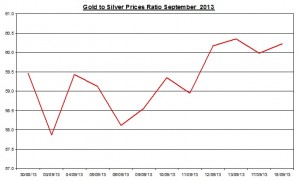 The gold and silver futures volumes of trade have declined in recent days and reached on Tuesday 149 thousand and 36 thousand, respectively. If the volume rises this week, this could suggest the chances of sudden sharp move in the prices of gold and silver due to high volume will increase. 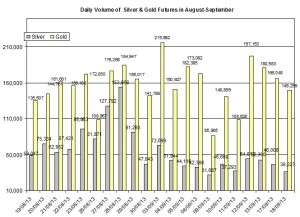 FOMC Meeting and Press Conference: The FOMC will decide whether it starts tapering QE3. Many analysts expect the FOMC to start taper its long term treasury bonds purchase program by $15 billion a month. The total asset purchase program, in this case, will remain at $70 billion a month. Considering the little effect the treasury bonds purchase program has had on the economy and the slow progress of the labor market, the FOMC might decide to take different measures to stimulate the economy, such as revising up the inflation target, increasing the mortgage backed securities purchase program, or pegging the long term interest rates (10 years) at 2.5%. If the Fed introduces new measures, this could drag back down the USD. If the Fed only reduces QE3, it is likely to pull up USD and drag down gold and silver prices. If the Fed doesn’t introduce any changes to its monetary policy, gold and silver prices might bounce back. In any case, the FOMC’s statement, outlook and press conference that follow are likely to move the forex, stocks and commodities markets;

The table below shows the changes in precious metals prices on the first two days after the FOMC statement was published in 2012 and 2013.

U.S. Housing Starts: The report was historically correlated with gold price – as housing starts rise, gold tended to decline the next day (even when controlling to the U.S dollar effect); in the recent monthly report, the adjusted annual rate reached 896,000 in July 2013, which was 5.9% above June’s rate;

Japanese Trade balance: In July 2013 the Japanese trade balance deficit bounced back by 42.3% compared to June, and reached 944 billion yen (roughly $9.48 billion) deficit (seasonally adjusted figures). This rise in deficit was due to the increase in imports (by 2.7%) and the fall in exports (by 1.8%).  Japan is among the leading importers of commodities, including crude oil and silver; its trade balance could offer information regarding Japan’s changes in demand for goods and services;

On Tuesday, the Euro/ USD currency pair slightly rose again by 0.19% to 1.3359. During the month, so far, the Euro/USD rallied by 1.04%. Moreover, other currencies such as the Aussie dollar and Canadian dollar also slightly appreciated yesterday against the U.S dollar by 0.40% and 0.27%, respectively. The correlations among gold, Euro and Aussie dollar have weakened in recent weeks, e.g. the correlation between the AUD/USD and gold price is 0.14 during August-September. These weaker correlations suggest the changes of the USD against other currencies have had a lesser effect on bullion rates compared to previous months.

← Gold and Silver Prices – Daily Outlook for September 17th
The Fed Decided: No Tapering At This Time →