The highly anticipated minutes of the FOMC meeting came out yesterday, and as many had expected, the minutes revealed that the recent no-taper decision from the September FOMC meeting wasn’t a clear cut decision. Some members thought it’s high time to consider tapering QE3. In the end, however, all members sans one voted for the no-tapering decision. The minutes also showed that the FOMC’s monetary policy relies on the available data including inflation and unemployment. Yesterday, the prices of gold and silver changed direction and tumbled down. Their recent decline may have partly been related to the minutes of the FOMC meeting. Will precious metals further fall? On today’s agenda: ECB Monthly Bulletin, BOE Rate Decision & Asset Purchase Plan, U.S. Jobless Claims, Bank of Japan’s Kuroda Speaks, ECB President Speaks, Australia Employment Update, China New Loans.

Here is a short review of precious metals for Thursday, October 10th: 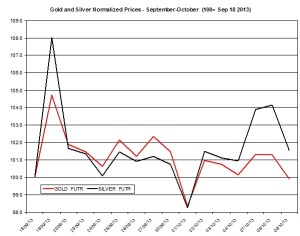 The ratio between the two precious metals rose on Wednesday to 59.78. During October, the ratio decreased by 2.30% as silver has slightly out-performed gold. 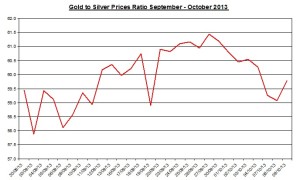 Although gold and silver have performed in different manners, i.e. silver slightly rose during the month while gold declined; their linear correlation of the daily percent changes remained strong and robust, as indicated in the chart herein. During October the linear correlation of their daily percent changes is at 0.934, which means the two metals’ relation remained tight. 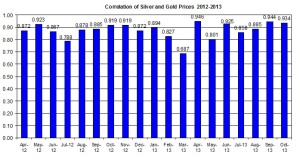 ECB Monthly Bulletin: This monthly report for September analyzes the economic changes of the Euro Area such as the price stability, interest rate decisions and governments’ debt; this update may provide some perspective on the outlooks of the EU;

BOE Rate Decision & Asset Purchase Plan: Bank of England will announce its basic rate for October 2013; the MPC will also state of any new shifts to its asset purchase pogrom; as of September, BOE kept its rate remained at 0.5% and the asset purchase plan at £375 billion;

U.S. Jobless Claims:  In the previous report the jobless claims slightly rose by 1k to reach 308k; the next weekly update may affect the U.S dollar and consequently commodities and equities markets;

Bank of Japan’s Kuroda Speaks: Bank of Japan Governor will give a speech the Bretton Woods Committee 2013 International Council Meeting, in WashingtonDC. Considering the recent high movement of the Japanese in recent weeks, his words could influence traders;

ECB President Speaks: Mario Draghi will give another speech this week at the at the Economic Club of New York;

Australia Employment Update: In the last report regarding August 2013 the rate of unemployment inched up to 5.8%; the number of employed (seasonally adjusted) slightly decreased by 10,800 people. This report could affect the Aussie dollar (see here the recent report);

China New Loans: This report will pertain to the recent developments in China’s new loans. Based on the previous report, the total loans changed direction and rose; this report is another indicator for China’s economic growth;

On Wednesday, the Euro/ USD currency pair slipped by 0.36% to 1.3524. During October, the Euro/USD rose by 0.27%. Moreover, other currencies such as the Japanese yen and Canadian dollar also depreciated yesterday against the U.S dollar by 0.47% and 0.25%, respectively. The correlations among gold, silver and Japanese yen have remained weak in recent weeks, e.g. the correlation between the USD/Yen and gold price is 0.10 during September/ October. The chart below shows these correlations. 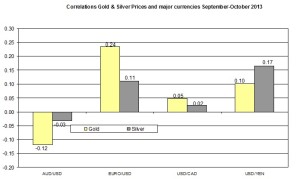 ← Is the Housing Market Cooling Down?
Is BP Undervalued? →