Gold and silver didn’t do much in the past couple of days as they both moved in an unclear trend: The price of gold changed direction and slightly rose yesterday after it had slipped a day earlier. The forthcoming publication of the minutes of the latest FOMC meeting might stir up the precious metals market. Will gold and silver resume their upward trend of the past couple of weeks? On today’s agenda: U.S. Existing Home Sales, Great Britain Net borrowing, and Minutes of the last FOMC Meeting.

Here is a short outlay for bullion for Wednesday, August 21st:

In the chart below are the normalized rates of precious metals for 2013 (normalized to 100 as of July 31st). The prices of gold and silver have rallied during the month. 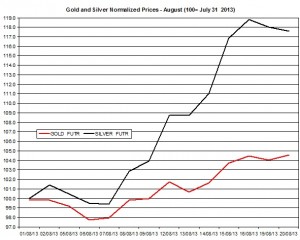 The ratio between the two precious metals slightly increased again on Tuesday to 59.49. During August, the ratio fell by 11.03% as silver has out-performed gold. 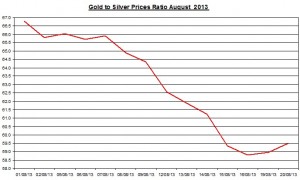 The gold and silver futures volumes of trade remained stable and reached on Tuesday 144 thousand and 75 thousand, respectively – relatively low levels compared to last week. If the volume will rise in the following day week, this could suggest the odds of sudden sharp movement in the prices of gold and silver due to high volume will augment. The chart below shows the changes in the volume of trade of silver and gold in the past month. 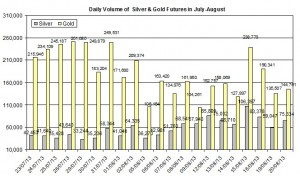 See here the weekly projection for gold and silver for August 19-23.

Minutes of the last FOMC Meeting: Following the recent FOMC meeting, in which the Fed kept its monetary policy unchanged, the prices of gold and silver rallied. The big question will remain whether the Fed will start tapering QE3 in the near future. The upcoming minutes might offer some insight behind the next move of the Fed and whether it will announce of tapering its asset purchase program in the September meeting. Considering the slowdown in growth of the job market, the low inflation, and the moderate sign of growth in other facets of the economy the Fed may decide to keep QE3 unchanged this year. In such a scenario, the recent rally of gold and silver may resume;

Great Britain Net borrowing: this report will refer to the monthly changes in the public sector net borrowing for July 2013; as of June 2013, the net borrowing reached £10.2 billion;

U.S. Existing Home Sales: This report shows the developments in U.S. existing home sales during July 2013; in the recent report regarding June 2013 the number of homes sold slipped to a seasonally adjusted annual rate of 5.08 million houses; if this trend will persist, it might affect precious metals;

The Euro/ USD currency pair slightly rose on Tuesday by 0.61% to 1.3417. During the month so far, the Euro/USD slightly increased by 0.86%. Conversely, other currencies such as the Aussie dollar and Canadian dollar depreciated yesterday against the U.S dollar by 0.40% and 0.45%, respectively. The correlations among gold, Euro and Aussie dollar have weakened, e.g. the correlation between the USD/CAD and gold price is -0.55 during July-August. If the correlations will continue to contract, this could suggest the effect the forex market has on precious metals market will diminish. 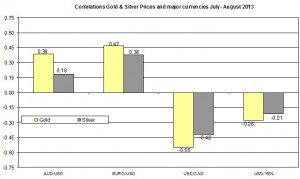 Current Gold and Silver Rates as of August 21st