The prices of gold and silver remained nearly flat yesterday after they had rallied on Monday. Their low volatility might be related to the U.S government shutdown, which may have reduced the volume of trade in the financial markets. Moreover, today’s publication of the minutes of the FOMC meeting could be the main event of the week of gold and silver. This is likely to keep bullion traders poised until the release of this report. The minutes could offer some insight behind the Fed’s next move in anticipation for the remaining two meeting in 2013 – one at the end of the month.  Other items on today’s agenda: Great Britain Manufacturing Production, German Industrial Production, U.S 10 Year Bond Auction, and ECB President Speaks.

Here is a short review of precious metals for Wednesday, October 9th: 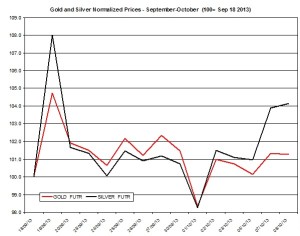 The ratio between the two precious metals declined again on Tuesday to 59.08. During October, the ratio decreased by 3.45% as silver has slightly out-performed gold. 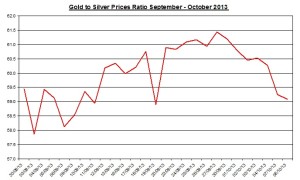 The gold and silver futures volumes of trade remained low and reached on Tuesday 131 thousand and 34 thousand, respectively. For both metals these trade volumes in recent days are the lowest levels in the past several months. If the volume remains low this week, it could suggest the odds of sudden sharp move in the prices of gold and silver will diminish. 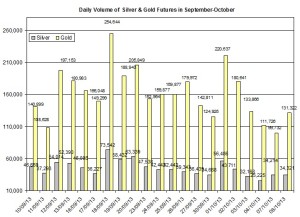 Minutes of the last FOMC Meeting: In the September FOMC meeting the Fed surprised the markets as it had decided to keep its monetary policy unchanged and not to taper its QE3 program. The no-tapering decision had short term effect on the prices of gold and silver but the in the bonds market long term treasuries rates fell down. Some suspect the decision was close and could have gone in the other direction (i.e. tapering QE3). The forthcoming minutes might offer some additional information behind the Fed’s recent decision and how close the decision was. This could also offer some perceptive behind the next two FOMC meetings;

Great Britain Manufacturing Production: In the previous report regarding July 2013 the index inched up by 0.2% (M-2-M); this news may affect the British Pound;

German Industrial Production: The next report will refer to September. In the last update, the industrial production fell by 1.7% during August;

U.S 10 Year Bond Auction: The U.S government will issue its monthly bond auction; in the last auction, which was held at the second week of September, the average rate reached 2.95% – the highest rate since mid-2011;

ECB President Speaks: Mario Draghi will give a speech at the Harvard Kennedy School of Government, in Cambridge. The title of the speech is “The Malcolm Wiener Lecture”;

On Tuesday, the Euro/ USD currency pair inched down by 0.06% to 1.3573. During October, the Euro/USD rose by 0.63%. Further, other currencies such as the Aussie dollar and Canadian dollar also depreciated yesterday against the U.S dollar by 0.05% and 0.53%, respectively. The correlations among gold, silver and Euro have remained weak in recent weeks, e.g. the correlation between the USD/CAD and gold price is 0.07 during September/ October. The chart below shows these correlations. 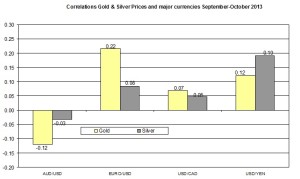