The prices gold and silver didn’t do much yesterday again even though there were sharp falls in other commodities markets most notably the drop in oil prices. Housing starts rose by 2.3% in August while building permits declined. Existing home sales also increased last month. This news may have had a modest effect on the commodities markets. According to the recent HSBC’s flash manufacturing PMI of China declined to 47.8 which mean the manufacturing sector is contracting at a faster pace in China. This new may adversely affect commodities rates during the day. Currently the prices of gold and silver are falling.  On today’s agenda: Philly Fed Manufacturing PMI reports, Philly Fed Manufacturing survey, ECB President Speech, GB Retails Sales, Spanish 10 Year Bond Auction, U.S. Jobless Claims update,  FOMC member Lockhart’s Speech.

Here is a short outlook for precious metals for Thursday, September 20th:

As seen below, the chart presents the developments of normalized prices of precious metals during the month (normalized to 100 as of August 31st). In recent days gold and silver didn’t do much. 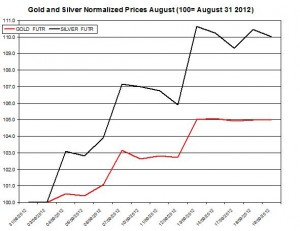 The ratio between the two precious metals rose on Wednesday to 51.22. During September the ratio decreased by 4.57% as gold under-performed silver. 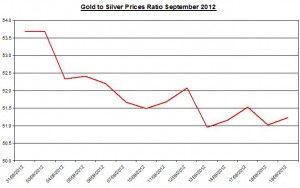 Philly Fed Manufacturing Index: In the previous August survey, the growth rate increased from -12.9 in July to -7.1 in August. If the index will remain negative it may adversely affect not only U.S Dollar but also American stock indexes, and commodities rates (the recent Philly Fed review);

ECB President Speech: Mario Draghi is likely to refer to the recent German Court ruling, and he may also refer to the future monetary steps the ECB will take in order to jump start the EU economy and lower the borrowing costs of the struggling EU economies such as Spain and Italy. This speech might affect the Euro to US dollar exchange rate;

Flash German, French and Euro Area Manufacturing PMI: In the previous report regarding August, the German PMI rose to 45.1 i.e. the manufacturing conditions are still contracting but at a slightly slower pace. This report will provide an indicator to the economic progress of the Euro zone and the leading economies’ manufacturing conditions; this news, in turn, might affect the Euro/USD exchange rate and consequently also bullion;

GB Retails Sales: This report examines the changes in the retails sales in Great Britain during August 2012. It may affect the direction of the British Pound currency. In the previous report regarding July 2012, retails sales edged up by 0.3%;

Spanish 10 Year Bond Auction: the Spanish government will issue another bond auction; in the recent bond auction, which was held at the first week of August, the average rate reached 6.65%;

U.S. Jobless Claims Weekly Report:  in the recent report the jobless claims rose by 15k to 382,000; this upcoming weekly report may affect the U.S dollar and consequently the rates of commodities;

FOMC member Lockhart’s Speech: The title of the speech is “The future of Workforce Development “; 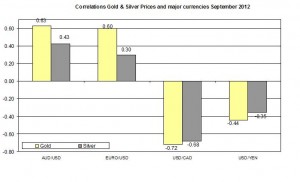 Current Gold and Silver Rates as of September 20th

The prices of precious metals didn’t do much again for the third consecutive day this despite the tumble of major commodities prices. Today’s Spanish bond auction turnout could affect Spain’s decision to ask ECB to start its bond purchase program. Today’s speech of Mario Draghi could also affect the sentiment towards the Euro if he will refer to the future steps of ECB. Today’s publications regarding Euro Area manufacturing PMI, U.S. jobless claims, Philly Fed survey could affect their respective currency if the reports will demonstrate a significant change as indicated above.  The speculations around the future steps of People Bank of China to stimulus the economy could keep affecting not only the forex but also commodities rates. In the meantime China’s recent manufacturing report could adversely affect commodities rates. Finally, if the Euro and other “risk currencies” will decline against the USD, this could adversely affect precious metals rates.