The prices gold and silver remained nearly unchanged yesterday and thus they have both continued their unclear trend from last week. Yesterday, President of Federal Bank of Philadelphia commented on the recent decision of the FOMC to launch QE3. He voiced his concern that this plan won’t help rally the U.S economy. U.S consumer confidence rose in September by 9 points to reach 70.3. This news may have helped rally some commodities prices. On today’s agenda: German 10 Year Bond Auction and U.S New Home Sales.

Here is a short outlook for precious metals for Wednesday, September 26th:

As seen below, the chart demonstrates the changes of normalized prices of precious metals in the last several weeks (normalized to 100 as of August 31st). During recent days the rates of gold and silver remained nearly unchanged as they have moved with an unclear trend. 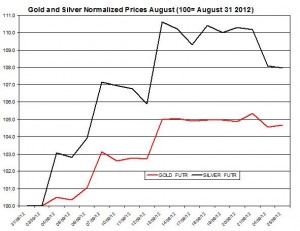 The ratio between the two precious metals also rose on Tuesday to 52.03. During September the ratio declined by 3.06% as gold slightly under-performed silver. 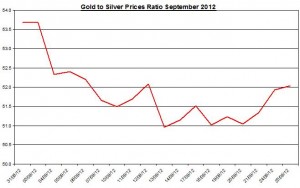 U.S. New Home Sales: in the previous report (regarding July 2012), the sales of new homes rose to an annual rate of 372,000 – a 3.6% gain (month over month); if the number of home sales will continue to rise, it may further indicate a sign of some recovery in the U.S real estate market which may also affect the path of the US dollar;

German 10 Year Bond Auction: the German government will issue another bond auction; in the recent bond auction, which was held at the first week of September, the average rate reached 1.42%;

The Euro/ USD continued its downward trend as it fell on Tuesday by 0.25% to 1.2899. During the month, however the Euro/USD rose by 2.54%. Further, other currencies including Aussie dollar also depreciated yesterday against the USD by 0.35%. As indicated in the chart below, there are still strong linear correlations among Euro/USD and precious metals rates: during recent months, the linear correlation between the gold and EURO/USD reached 0.5 and 0.7 (daily percent changes). Following the recent bearish market sentiment towards the “risk currencies”, if the bearish market sentiment will continue, it is likely to hold back gold and silver from rising. 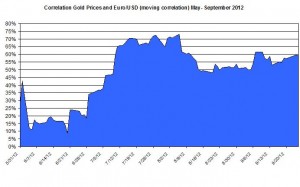 Current Gold and Silver Rates as of September 26th

The prices of precious metals remained nearly unchanged as the market still waits for Spain to make the next move. The recent U.S consumer confidence may help rally commodities rate. There are reports that ETPs continue to raise their bets on silver as the amount held in ETPs has reached 18,525.76 metric tons which is only 0.6% shy from its record high from last year.  This suggests that many bullion traders still have faith in precious metals. Today’s German bond auction might partly ease the recent bearish market sentiment in the Euro Area if the auction will go well. Today’s publication of U.S new home sales could affect the US dollar as indicated above. Finally, if the Euro will continue to trade down, this could hold back bullion rates.